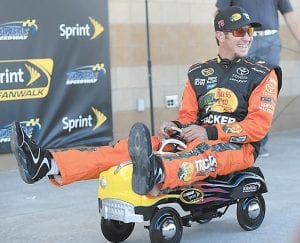 Saturday night at Kansas Speedway in the GoBowling 400, Martin Truex Jr. was clearly the class of the field.

When the haulers unloaded to begin the weekend of racing, Truex Jr.’s Toyota was the dominant car as he sat on the pole and led 172 of the 267-lap race. His dominance lasted until he came down pit road for a routine pit stop on lap 212.

What looked like a normal pit stop by Truex Jr.’s pit crew quickly turned into a disaster soon after the jack dropped. While he was getting his Toyota back up to speed entering turn one, he radioed back to his crew that he had a bad vibration in the front end of his car and that he would be pitting again after he limped around the track.

Once he returned to the pits, his crew found that a broken head bolt came off the brake and got caught behind the right-front wheel. After coming into the pits in first place, he returned after the second stop one lap down and in 21st place with any chance of winning all but gone. He was able to get back on to the lead lap and finished 14th.

It was definitely not the finish that he had envisioned, but his ability to work his way back up to 14th kept him in the hunt for one of the 16 Chase spots. He now sits in the eleventh slot, 48 points ahead of the sixteenth spot. At this point of the season, after just 11 races, only six drivers have posted a win that all but guarantees their spot in the Chase. The remaining positions are earned by a driver’s position in the points standings.

Kyle Busch was able to take advantage of Truex Jr.’s misfortune and took over as the leader of the race on lap 231. It wasn’t all smooth sailing for Busch to the checkered flag. He had to control a couple of late restarts before capturing his series leading third win of the season.

The win turned out to be a little extra special for Busch, coming at one of only three tracks left on the Sprint Cup schedule where he had yet to visit victory lane. His victory at Kansas now leaves Charlotte and Pocono as the only tracks where the Joe Gibbs Racing driver has yet to capture a checkered flag.

The win tied Busch with Tony Stewart as the winningest driver at Joe Gibbs Racing with 33 wins and further separates the Gibbs organization from the rest of the pack. Busch’s three wins — along with Carl Edwards’s two wins and Denny Hamlin’s victory in the season opening Daytona 500 — account for over half (6) of the wins in the first eleven races of the season.

Teammate Matt Kenseth still hasn’t won a race this season but is in 14th place in the Chase standings, giving JGR a quarter of the 16-driver field. That domination swells even more when you add Truex Jr. to the list of Gibbs drivers in the Chase, considering that his Furniture Row Racing team has a strong alliance with JGR.

PIT NOTES: The 2016 rookie class of drivers includes Ryan Blaney, Chris Buescher, Jeffrey Earnhardt, Chase Elliott and Brian Scott. Both Elliott and Blaney have separated themselves from the pack in the competition for Rookie of the Year honors as both drivers continued their good start to the season by posting top-10 finishes at Kansas. Elliott has posted two poles, 3 top-5 and seven top-10 finishes, putting him firmly in the hunt for a spot in the Chase and 11th in the point standings. Blaney also finds himself in the Chase field at this time. He sits in the final transfer spot at 16th after beginning the season with one top-5 and four top-10 finishes. Tony Stewart’s attempt to crack the top-30 in points so he can become Chase-eligible with a victory took another step in the right direction with a 12th place finish at Kansas. He now sits in 37th place, 59 points away from the top-30.