Video games try to get players into the kitchen 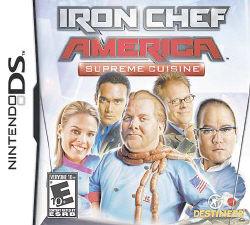 Cooking games include this one by Destineer. (AP)

Cooking and video games have more in common than you might think.

They both require a mix of mental and physical dexterity. It takes a lot of practice to get good at either. And champion gamers, like world-class chefs, have instinctual and improvisational talents that are hard for mere mortals to fathom.

Contrary to stereotype, videogame addicts don’t just survive on Cheetos and Red Bull. We like a good meal, and we’re willing to put down the joystick long enough to prepare one. And a few of the game industry’s most prominent publishers are encouraging just that.

— Nintendo’s first foray into the kitchen is the blandly titled “Personal Trainer: Cooking” (for the DS, $19.99). This digital cookbook includes 245 recipes that you can sort by ingredient, calorie count, preparation time or even country of origin.

Each recipe includes extremely detailed, illustrated instructions. Even a relatively simple production like guacamole has 15 steps; beef bourguignon has 49. So even if you don’t know how to boil pasta, you can whip up a fairly decent meal.

— Atari’s “What’s Cooking? Jamie Oliver” (for the DS, $29.99) offers about 100 recipes from the erstwhile Naked Chef, and its appeal rests largely on how charming you find the spiky-haired Brit. Its instructions aren’t as detailed as those in “Personal Trainer,” and kitchen neophytes will wonder why certain steps are glossed over. An oldfashioned cookbook is probably a wiser purchase.

— Majesco pioneered the cooking game, and “Cooking Mama World Kitchen” (for the Wii, $49.99) is another worthy installment of its addictive franchise. The endearing Mama guides you through the virtual creation of a variety of global delights, from chocolate chip cookies to ratatouille. You use the Wii remote to simulate a range of kitchen chores, from chopping vegetables to stirring soup to rolling dough. It’s easy to pick up and very entertaining, and may just inspire a new generation of master chefs.

— Destineer’s “Iron Chef America: Supreme Cuisine” (for the Wii, $39.99; for the DS, $29.99) turns the “Cooking Mama” template into a competition. It does a decent job of simulating kitchen tasks, but it’s difficult to tell what you’re supposed to be preparing in each round.

— Finally, Ubisoft’s “Hell’s Kitchen” (for the Wii, $39.99; for the DS, $29.99) combines kitchen work with restaurant management, and neither sim is very entertaining. This one’s recommended only for masochists who dream of being scolded by Gordon Ramsay.