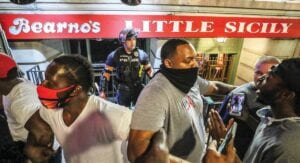 In this May 28 photo, protest organizers surrounded a Louisville Metro Police officer and joined arms to make sure that the crowd did not touch him. (Michael Clevenger/ Courier Journal via AP)

Video released by police shows a popular barbecue stand operator firing a gun as officers approached his business in Louisville shortly before he was shot to death, the city’s acting police chief said Tuesday.

The video showing David McAtee opening fire early Monday was obtained from security cameras at his business and another business, acting police Chief Robert Schroeder said. McAtee fired his gun while officers and National Guard soldiers were trying to clear a crowd from a parking lot to enforce a curfew, he said.

“This video appears to show Mr. McAtee firing a gun outside of his business door as officers, who are using pepper balls to clear the Dino’s (Food Mart) lot, were approaching his business,” Schroeder said. “This video does not provide all the answers. But we are releasing it to provide transparency.”

Among the unresolved questions: why he opened fire and where were police, Schroeder said.

McAtee was shot early Monday amid waves of protests in the Kentucky city since last week. But witnesses said the crowd had nothing to do with the demonstrations.

The demonstrations were set off by the deaths of a black woman from Louisville — Breonna Taylor — and a black man in Minneapolis — George Floyd — in encounters with police.

A Louisville pastor said Tuesday that the community ultimately needs to see the “full analysis” of what led to McAtee’s death and not rely solely on the video.

“We would like to get all of the facts and not just some of the facts,” said the Rev. Frank Smith Jr., president of the Interdenominational Ministerial Coalition.

Smith, who had not yet seen the video, added: “I would not see that he, … on his own, would just decide to start shooting at the officers who were there. I’d like to know were there other shooters? What provoked whatever shooting that took place? And so that’s why we would like to get the full picture and not just part of the picture.”

McAtee was well-known in the community and was friendly with officers, even providing them meals.

The video did not have audio and it was unclear from watching who or what McAtee fired at, but Louisville police Maj. Paul Humphrey said it appeared that he fired at police.

The conflict occurred as officers fired pepper balls to disperse the crowd, Humphrey said. The video shows officers speaking to people near McAtee’s business, he said. Why officers approached them is part of the investigation, he said.

“As the officers are addressing those individuals, Mr. McAtee appears to fire at the officers and they take cover and return fire,” he said. “But without the audio and without having interviewed the officers yet, that is yet to be determined exactly how those incidents occurred.”

He declined to say if a gun was recovered from McAtee, saying that will come out in the probe.

Witnesses said people were not gathered there to protest.

Kris Smith said he was at a restaurant — “just outside having a good time, having drinks, eating barbecue” — when the soldiers arrived.

Beshear authorized state police to independently investigate, promising the probe will be conducted in an “honest and transparent way that will not take months.”

Louisville’s curfew has been extended until June 8.

Protesters have been demanding justice for Taylor, who was killed in her home in Louisville in March. The 26-year-old EMT was shot eight times by narcotics detectives who knocked down her front door as they attempted to enforce a search warrant. No drugs were found in the home.

Floyd died after a white Minneapolis police officer put his knee on the handcuffed man’s neck for several minutes, even after he stopped moving and pleaded for air.