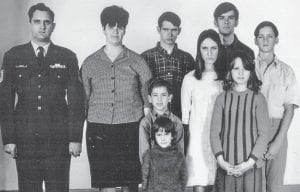 The Vanover family posed for a passport photo before leaving for Lindsey Air Station in Wiesbaden, Germany, and Everett Vanover’s new assignment.

After my 11 years at Travis Air Force Base, Calif., I was called to our personnel office. I was told they needed munitions experts in Vietnam in the worse way. I would be sent to Colorado for 14 weeks of training. The Air Force found out that I had not been overseas in 14 years.

At that time I had 22 years of military service and did not plan on going to Vietnam, and I said I would put in for my retirement. When my boss found out what personnel wanted of me, he was very upset with them. He made a call to our headquarters at Randolph Air Force Base, Texas.

A few days later, I got a call from Randolph. A friend that I had played softball with at Travis for years told me he had a nice overseas assignment for me. He had put the word out to our overseas bases, and he received many calls from bases that knew of me and wanted me.

When he told me of the bases that wanted me, I talked it over with my family. We picked Lindsey Air Station, Wiesbaden, Germany. I called Randolph Field back, they gave me the information I needed, I typed my orders, and after my best assignment of 11 years at Travis, I was gone in October, 1968.

There were three wonderful years at Lindsey Air Station, Germany. I enjoyed it as I had my family with me. I was in charge of the printing and message center department for all of Europe. My last year in the military, I had the same duties at the Pentagon. I had dodged the Pentagon area for years, but now they had me.

I retired in December 1972, a great career at an end and I don’t regret a moment of it. I would go back and do it all over if I could.