View from overlook is gorgeous 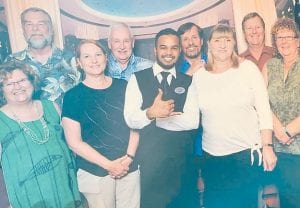 Hello everyone. I hope all are doing fine and dandy. We had a lot of rain during the past week and there has been flooding in the area. It didn’t affect us directly and I am glad for that. My brother, John Campbell, Mike and I did drive around to look at the floodwaters. We ran into areas where water was across the road. On our drive we also went to the Pine Mountain Overlook. It’s absolutely gorgeous looking over the mountains. There was some fog, which made for a beautiful photo.

The snow that happened after the flooding was pretty. I love how the mountains look with snow.

We have some bushes that are starting to bloom and I hope they don’t get destroyed by a hard freeze.

Bob Day of Danville, passed away on February 8, 2020. His wife is Jewel Banks Day and Jewel is a cousin. David and Millie Banks went to Danville yesterday to be with Jewel. I don’t have any details regarding the service at this time. Condolences go out to his family.

Little Cowan Primitive Baptist Church will be hosting a revival starting March 8, 2020. All are invited and welcomed to Little Cowan Church.

Randy Brown and Bob Caudill went on a fishing trip. Randy said it was cut short due to all the rain. It wasn’t a good time to fish.

Randy Brown has several new baby sheep. I love seeing his sheep. He has one sheep that seems to be always on the wrong side of the fence and Randy said it won’t follow the rules. It’s a cute sheep.

John, Mike, and I have been playing Catan about every day. We play three games as Mike won’t play more than that. On Sunday when we played, we each won a game. That was the first time we all won.

John’s dogs, Lady and Buddy, are still entertaining us. They walk to the house every day to get a dog treat. We are now buying the ten-pound box of dog treats. Buddy will take his treat and go outside to eat it while Lady will eat in the house and she expects another one when she’s done. Plus, she doesn’t clean up her crumbs very well. To get her outside, you have to take the dog treat outside and she’ll follow. If I don’t take dog treats with me to John’s house, they aren’t happy dogs. Luckily John has dog treats in case I forget. Buddy and Lady are the greatest dogs.

Hopefully everyone is staying away from the flu. Mike and I do get flu shots every year and I believe they help. While we were on the cruise ship, there were stands everywhere so you could sanitize your hands. Going into the regular dining room there was always a person there that would put sanitizer on your hands for you. Washing hands was part of our ship routine. I think it kept us from getting sick.

On our cruise we had the best assistant waiter. His name was Adikash Booluck and he was from Mauritius, Africa. We did get him to take a picture with us and I told him I would submit the picture to the Mountain Eagle newspaper. Friends who did a back-to-back cruise said he was asking about the newspaper after we got home. He is back home now but I’ll get the newspaper to him.

This week’s quote is attributed to Yoko Ono and it seemed appropriate for Valentine’s Day. “There’s a long life ahead of you and it’s going to be beautiful, as long as you keep loving and hugging each other.”

Please send your news to CowanNews@aol.com.

Have a wonderful week. Remember that spring is getting closer every day.