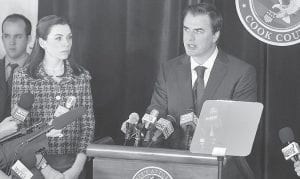 Julianna Margulies, left, and Chris Noth are shown in a scene from the CBS series, “The Good Wife.” The high drama of this political season has been echoed by episodic TV like “The Good Wife” and Showtime’s “Homeland,” where character Nicholas Brody returns home from imprisonment in Afghanistan to become a U.S. Congressman. (AP Photo/CBS)

It seems you just can’t watch TV without confronting politics.

And that’s not just the glut of campaign coverage, now reaching its feverish climax.

No, the high drama of this political season has been echoed by episodic TV this season. If candidates in real life are often criticized for playing roles and relying on scripts, these TV shows’ pretend politicos make no bones about it.

This isn’t anything new. Years ago, viewers celebrated the presidency of Jed Bartlet on “The West Wing.” Fans of “The Wire” savored the ascent of Tommy Carcetti from the Baltimore city council to the Maryland governor’s office. Michael J. Fox, and then Charlie Sheen, worked for New York Mayor Winston on the sitcom, “Spin City.”

And don’t forget HBO’s hapless Vice President Selina Meyer. Played by Julia Louis-Dreyfus, she’ll be back with the comedy “Veep” next year.

But who’s in office right now?

— CBS’ “The Good Wife” is set in a Chicago law firm, but it has always had a political streak, thanks to Peter Florrick, estranged husband of attorney Alicia Florrick (series star Julianna Margulies).

Played by Chris Noth, he was the state’s attorney who, when the series began, was brought down by a sex and corruption scandal. He then clawed his way back to his old job. Now he’s running for governor of Illinois.

— A parallel gubernatorial race is unfolding in Illinois on the just-concluded second season of the Starz drama, “Boss,” as, even more dramatically, longtime Chicago kingpin Tom Kane (Kelsey Grammer) is struggling to maintain his grip as mayor.

— On the new ABC series “Nashville,” Teddy Conrad is running for mayor of Music City. Up to now he’s been the in-the-shadows husband of country legend Rayna Jaymes (series star Connie Britton). But with the help of Rayna’s father, ruthless tycoon Lamar Wyatt, Teddy (played by Eric Close) hopes to win a spotlight of his own.

— Showtime’s “Homeland” had a national hero in U.S. Marine Sergeant Nicholas Brody when he returned home after eight years’ imprisonment in Afghanistan. None of his admirers could have dreamed that Brody (played by Damian Lewis) had been turned against the U.S. by his al-Qaida captors and was primed to carry out a terrorist attack on American soil.

Now, in the series’ second season, Brody has been elected U.S. Congressman and is being groomed for the vice presidency.

— ABC’s “Scandal” is also set in Washington, where Olivia Pope and her staff are crisis management specialists.

Her firm’s elite clientele often puts Olivia (played by Kerry Washington) in contact with the nation’s biggest power brokers. And none is more powerful than President Fitzgerald Grant, whom Olivia previously served as White House Communications Director — and with whom she’s had a passionate affair, right under the nose of the first lady.

Serious business! But make-believe politics isn’t always so dramatic on TV. Nor is it always so big-time.

— Just remember Leslie Knope, a dedicated public servant in fictional Pawnee, Ind., on NBC’s comedy “Parks and Recreation.” Played by series star Amy Poehler, Leslie used to be Deputy Parks Director, then at the end of last season, she won a seat on the Pawnee City Council.

Her boyfriend has moved to Washington to manage a congressional campaign, and maybe Leslie will someday find her way to Washington, too.

But for now she’s a plucky change agent in Pawnee. And that’s as it should be. Leslie serves as a reminder that all politics is local — right on your TV.