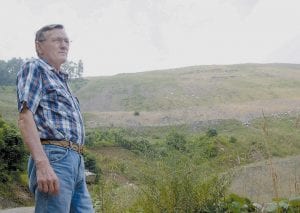 Sam Gilbert looks over a mountain damaged by surface mining near his home in Eolia. The federal surface mining law, which was designed to regulated the environmental impacts of such mining, is now 30 years old. (AP Photo/Samira Jafari)

The curling dirt road to the home of Rully and Erica Urias, near Kentucky’s eastern tip, is a path through a changed landscape. Their home is surrounded by strip mines that remove the tops of mountains to reach the underlying coal seams and push dirt and rock into heads of the surrounding hollows.

Rully and his mother Brenda, who lives next door, have worked for coal companies. They don’t want to see all mining go away, but they want current laws to be enforced and they want mountaintop removal limited.

They say blasting routinely shakes their homes and coal dust settles over everything, so that Brenda says she “can’t even keep lawn furniture outside.” And they worry about floods, erosion and water pollution from the mines.

Since strip mining came to their road two years ago, the family has watched their neighbors and relatives move away. “People got tired of it,” Brenda said. “Most people sold out.”

But the Urias family is determined to stay, and they have spoken out about the effects of mining. They have found some allies in their fight, but most come from outside the Appalachian coalfield – activists, authors and journalists who write stories for national and regional newspapers and magazines.

“We get help from Louisville and Lexington, but as far as around us, you won’t see a lot of support,” said Rully. Their neighbors in Pike County are “told we’re trying to take their jobs away from them,” Rully said.

Much the same has been said in the legislatures of Kentucky, Tennessee, Virginia and West Virginia, where efforts to limit mountaintop removal have failed or never gotten off the ground. So now the debate is moving to the halls of Congress, where opponents think they have a better chance for change.

Chuck Nelson, of Sylvester, W. Va., an underground miner who dislikes mountaintop removal, agreed that in his state the coal industry is too powerful and intimidating for restrictions to pass. He said a regional alliance of opponents could organize communities across state lines and “overcome that power.”

For opponents, the term “mountaintop removal” conjures up images of decapitated hills, fouled streams and a landscape forever changed, not for the better.

For others, the practice means more developable land for Central Appalachia, good-paying jobs and a well-managed natural resource.

Because that view is widely held in the Appalachian coalfield, opponents acknowledge that they must turn the tide of coalfield opinion to be successful, even in Congress.

Widespread opposition from coalfield residents to industry practices in the 1960s and 1970s helped lead to the passage of the 1977 federal strip-mine law, but now supporters of mountaintop removal point to the economic benefits of mining and the development on reclaimed sites.

“Things flourish” where you have those sorts of new developments, said Tom “Tick” Lewis of Whitesburg. He cites local developments as diverse as a wildlife management area where elk now roam, to sites for Wal-Marts, hospitals, nursing homes, schools, industrial parks and golf courses.

Reclaimed land can be a “productive natural resource” for grazing, wildlife habitat and forestry, said Carl Zipper, director of the Powell River Project at Virginia Tech, which works with the coal industry to “enhance reclamation through research and education.”

Opponents say much of the land permitted for mountaintop removal is far from infrastructure, making development unfeasible. They also note that it is impossible to reclaim the diverse forest ecosystem destroyed by mining, and long-term problems, like the pollution of waterways, will persist even after reclamation is over.

Lewis concedes that if mountaintop removal is going on behind one’s house, then “it becomes more personal.”

The first thing a visitor sees when pulling into the Urias family’s driveway, where their houses sit tucked into a forested hollow, are boxes of bottled water stacked neatly in the front yard.

The water is delivered to them by a coal company, they said, because, since the surface mining began around their home, their water is unfit to use.

Several miles to the southwest, in Letcher County near the Virginia border, mines operate behind the home Sam and Evelyn Gilbert of Eolia.

The Gilberts successfully fought the permit for a valley fill that would have been placed behind their home. But they feel like they are up against powerful forces. “We’re throwaway people. They look upon us as ‘the hell with them, they’re of no benefit to us.’ The coal is more important,” said Evelyn.

Ten men from Eolia work on the site near the Gilberts’ house, Sam said. “They won’t say anything because of their jobs,” he said. And many local residents still live on land leased “cheaply” from the coal companies, he said. “They can’t speak out,” for fear of losing their leases, he said.

Gilbert said the fight to limit mountaintop removal needs to involve all levels of government. Federal laws should be passed and strictly enforced and local and state governments should be held accountable for enforcing these laws, he said.

Mountaintop removal opponents have “emotion” on their side while proponents have the facts, said Bill Caylor, president of the Kentucky Coal Association. “Emotions will trump facts just about every time,” he said.

Because it is an emotional issue and there is a “knee-jerk” perception that mountaintop removal is bad, Caylor said he could envision public opinion turning. Legislation could gain support and could be reintroduced over and over until it progresses, he said.

Legislation to limit mountaintop removal in Kentucky, by banning valley fills that bury streams, has twice died in the state House Natural Resources and Environment Committee.

In West Virginia, the other state where mountaintop removal is prevalent, “It would be pointless to go to the Legislature,” said Joe Lovett, executive director of the Appalachian Center for the Economy and the Environment.

Lovett said more limits on mountaintop removal mining on the state level have “zero chance.” West Virginia is “much more dominated by coal” than other Appalachian states and coal is “spread throughout the state,” he said.

Lovett says the strategy he follows is to use lawsuits and permit challenges to “fight the worst abuses, stop things as much as we can and hold the line until we get an administration that would enforce the laws.”

Tennessee has a much smaller coal industry and fewer mountaintop mines than the other three states, and has a hearty tourism base, which could influence the political climate on the issue. The state’s student legislature has submitted legislation to ban all surface mining in the state. The bill has yet to find a sponsor in the legislature.

Carol Judy of Clairfield, Tenn., said she doesn’t “look for the political will” in her lifetime to make real change. She compares the way the land in Appalachia has been treated with how the people are treated.

“Our voice is ignored, or made fun of, or belittled,” she said. “I think it’s so sad that people in my community tell me that they can’t speak out. It makes it look like it’s just a few oddballs” who are opposed.

Aligned with the Sierra Club, Selvage’s group is headquartered in Appalachia, Va., where in 2004 a three-year-old boy, Jeremy Davidson, was killed when a halfton boulder dislodged from a strip mine crashed into his house while he slept.

That event helped to galvanize opposition in the region, said Selvage. But, as in the other affected states, it is hard for them to speak out because they feel intimidated, she said. “It’s an ongoing conversation,” she said. “People have to be nurtured.”

Selvage is not optimistic about change on the state level. Politicians from the eastern part of the state “don’t understand what we live with every day,” she said. “They don’t come to southwest Virginia, don’t see the mountaintop removal in our backyards.”

In Kentucky’s Letcher and Harlan and counties, on the Virginia border, public opinon about mining and the environment is deeply divided, according to polling done for the Carsey Institute at the University of New Hampshire as part of a survey of certain counties in selected regions of rural America. Harlan and Letcher were the counties chosen to represent Appalachia.

With prospects for state action poor, opponents have directed their gaze to Washington. More than 100 traveled there in May to lobby for federal legislation, the Clean Water Protection Act, HR 2169. The law, which has at least 79 co-sponsors, would limit mountaintop-removal mining by overturning a Bush administration change to the Clean Water Act that reclassified mining waste and made it acceptable to dump the debris into valleys, covering streams.

West Virginia’s Nelson said building an alliance across state borders is crucial to turning public opinion. Organizations and citizens should “come together and form one coalition,” he said. Their influence would grow and they could work together toward change, he said.

Nelson joined about 70 others at the Mountain Justice Training Camp in the coalladen Cumberland Plateau of East Tennessee in May. For a week, organizers held workshops and strategy sessions, shared stories, networked and planned for the future.

Judy said she can see some hope in the younger generation, like some of the attendees at the training camp. “These kids are a testament that all is not well and they’re not OK with the status quo,” she said.

While local foes of mountaintop removal value the help they get from outside the coalfield, there can be tensions when outsiders bring their activism to the mountains, said Julie Shepherd, a North Carolina native who is an operations and production assistant at WMMT Radio in Whitesburg.

Outsiders often don’t understand the complexity of the issues and can unwittingly uphold stereotypes of the mountains, Shepherd said. “Local people need to drive the movement,” she said, adding that the tone and attitude of people from outside the coalfield can come across as “We know what’s best.”

Shepherd said solutions could come from inside the coalfield: “If the political climate was right, there could be a local movement.”

Even if the fight moves outside the coalfield, with federal legislators or state lawmakers from population centers ultimately deciding the issue, both sides of the debate say affecting public opinion is key.

Caylor, of the Kentucky Coal Association, said environmental groups have deep pockets and powerful public relations tools. “A vocal minority and the press” keep the issue alive, while many of the outspoken opponents and the media lack understanding about mining in general, he said. “These people are just against mining, period,” he said.

For Appalachian residents, the issue is not black or white, which is the way both opponents and supporters often frame the debate, said Shepherd. “It’s a gray issue,” she said. “It’s the environment, but it’s also people’s livelihoods. There should be more dialogue, not ‘my way or the highway.'”

Thirty years ago last week, President Jimmy Carter signed the federal Surface Mining Control and Reclamation Act. This article and two follow-up articles which will appear next week bring a regional perspective to the issue of mountaintop removal as seen by its supporters and detractors who live in central Appalachia. The articles were produced, under the direction of the Institute for Rural Journalism and Community Issues at the University of Kentucky, by Mary Jo Shafer, who recently became assistant city editor of The Anniston (Ala.) Star. Shafer did the work as a concluding internship to earn a master’s degree in community journalism from the University of Alabama, through a new program based at the Star and funded by the John S. and James L. Knight Foundation.