By ADAM BEAM and BRUCE SCHREINER
The Associated Press 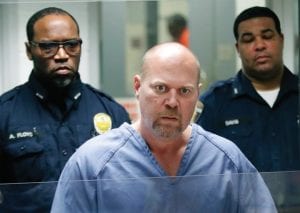 Gregory Bush was arraigned on two counts of murder and 10 counts of wanton endangerment last week in Louisville. Bush shot and killed two African-American customers at a Kroger grocery store October 24 and was arrested as he tried to run away. (Scott Utterback/Courier Journal via AP)

Before he was accused of shooting and killing two black people in a Kentucky grocery store last week, Gregory Bush knocked on the door of a predominantly African-American church.

It was 2:44 on a sunny Wednesday afternoon, a day when many churches have midweek services. About 70 people had been inside First Baptist Church Jeffersontown for a Bible study, but it had ended by the time Bush arrived and the doors were locked.

If Bush had been there just 45 minutes earlier, “it probably would have been very different,” said Pastor Kevin L. Nelson.

“We caught him on camera at the front door, after he knocked and pulled on it and banged on it, he stood there and put his hand on his gun,” Nelson said, adding that he believes the gunman would have shot whoever came to the door.

“We felt that that was his attempt to make it another Charleston,” he said.

A police chief in Kentucky has acknowledged the shooting deaths of two black people at a Kroger grocery store in suburban Louisville were racially motivated. Bush, who is in custody, is white, and the FBI has said it is investigating the shooting as a potential federal hate crime.

On Saturday, a man killed 11 people in the Tree of Life Synagogue in Pittsburgh, adding to a growing list of violence at houses of worship. Nelson mentioned the 2015 racially motivated shooting deaths of nine black people at an African American church in Charleston, South Carolina. Others followed, including the shooting deaths of two people at a New York City mosque in 2016 and the murder of 26 people at a Baptist church in Texas in 2017.

Federal prosecutors set in motion plans to seek the death penalty against Robert Gregory Bowers, the man charged in the Pittsburgh shootings. Authorities say Bowers expressed hatred for Jews during the rampage and later told police that “I just want to kill Jews” and that “all these Jews need to die.”

Speaking to a gathering of the conservative Federalist Society in Kentucky, U.S. Senate Majority Leader Mitch McConnell said of the Kentucky and Pennsylvania shootings: “if these aren’t the definitions of hate crimes, I don’t know what a hate crime is.”

“I think the whole tone in the country right now needs to be ratcheted down,” Mc- Connell said. “And these horrible, criminal acts only underscore the need for all of us to kind of dial it back, and to get into a better, more respectful place.”

The violence has prompted church leaders to grapple with finding a balance between securing their congregations and maintaining robust outreach programs they say are the core of their faith.

“I think it is sad you have to even lock the doors of the church,” Nelson said. “It was just the mindset where I grew up; you didn’t do certain things around the house of worship or even among the people of God. All that is changed today.”

In March, the Kentucky Baptist Convention — one of the state’s largest denominations — held a statewide church security conference for the first time. More than 1,000 people attended, said Paul Chitwood, the convention’s executive director. He said many people come to church because “they are hurting and they are confused.”

“The church wants to receive those people. And just because somebody looks different or acts a little different, well we want them in our churches,” he said. “But sometimes there is an individual who wants to do harm. We want for our churches to be prepared to respond to that and protect the congregants.”

Nelson said his church, which is not affiliated with the Kentucky Baptist Convention, has police officers in their services. He said they would likely “tighten up” security. In the meantime, he says he his praying for the victims and for the men charged with the crimes.

“Every soul is precious to God,” he said. “And it should be to us.”