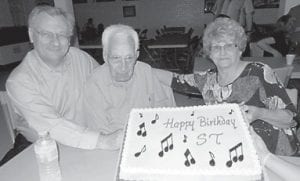 BIRTHDAY — S.T. Wright celebrated his birthday with family and friends at the Hemphill Community Center on April 17. From left to right are Sam Wright, S.T. Wright and Elsie Adams.

Virginia Brown celebrated her 96th birthday on April 15 with a pizza party at her home with son and daughter in-law, Randy and Eula, and nieces, Carol, Anna and Doris.

We spent the rest of the day playing games. Virginia was the big winner. She also received many cards, phone calls and flowers, which she enjoyed very much.

Morgan Eldridge’s birthday was on Sunday, April 19. She celebrated on Saturday with a big fish fry. Her husband, Byron, had been fishing and caught a big bass. The birthday cake was a beautiful and delicious homemade strawberry cake. About 20 family members and friends attended, and they all had a really good time.

Doris’s sister, Donna, spent Friday night with her and helped prepare for the party.

We had a good surprise on Saturday afternoon when Susan Stamper of Lexington came by with her grandchildren, Tyler, Allysse and Stephen. Her sister, Thelma Ison, was with them, too.

Yvonne and Linda went to Frankfort and Regina Stivers took them and friend Tammy Cox to Keeneland Racetrack. They also had supper at Cracker Barrel with Mike and Ramona Finchum and Forrester and Callie Finchum.

Linda Combs send happy birthday wishes to Robby Crawford on April 23, and to his daughter-in-law, Jenna Crawford, on April 24. She lives in Indianapolis, Ind.

Sympathy to Beverly Day Bolling and family on the death of James Elmer Bolling. He was from Craft’s Colly, but had lived in Spotsylvania, Va., for years.

We were sorry to hear of the death of Juanita Pitts of Kingston, Tenn. She was the wife of Junior Pitts, formerly of Cowan, and the mother of Eddie Pitts. Carl and Marsha Banks attended the funeral.

On May 8, Amanda and Tyler Galer will be coming to Cowan to celebrate a wedding anniversary.

Edison Banks will be delivering the commencement address for the Hazard Community College on May 9.