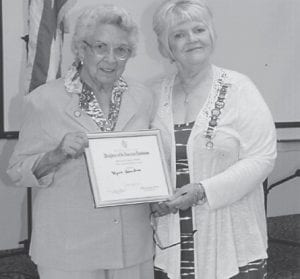 Virginia Gibson Brown recently won an award from the Daughters of the American Revolution. Pictured with her is Marsha Banks, Regent of Pine Mountain Chapter.

Virginia Gibson Brown, youngest sister of Letcher County’s “The Gibson Girls”, received an award from the National Society of Daughters of the American Revolution. The award is in recognition of her efforts to promote historical preservation through her gift of embroidery and quilting.

In April, Pine Mountain Chapter of the DAR entered a quilt designed and crafted entirely by Mrs. Brown at the Kentucky Society Spring Conference in Lexington. She was awarded first place for the beautiful velvet quilt with satin lining. This win automatically allowed her quilt to be judged at the National Society Continental Congress last week in Washington. D.C. In Washington, she placed second for her work.

By having her work displayed and because the judges believed her work to be of the quality to be shown in Washington, she was nominated for a National Women in the Arts Award. This National Award was granted through her chapter, and was bestowed to Virginia Brown at the Pine Mountain Chapter Awards Night held on May 20.

Members of the Pine Mountain Chapter said, “We are thrilled for her award and honor to one of Letcher Counties most outstanding women. We congratulate her on her role in our community, and the lives she continues to touch through her gracious sharing of this God given talent.”