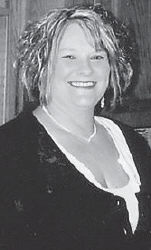 Funeral services for Virginia Leigh Brock Johnson, 39, were held December 6 at Everidge Funeral Home. Burial was in the Whitaker Cemetery at Seco.

A daughter of the late Carlos and Virginia Pearl Brock, she was born in Letcher County. She died December 2 at Whitesburg Appalachian Regional Hospital.

She was a sister of Larry Brock, Calvin Brock, and Kimberly Brock.