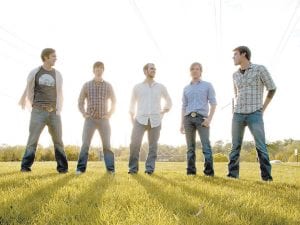 Members of the rock band Sons of Bill include brothers Sam Wilson, James Wilson and Abe Wilson, and friends Seth Green and Todd Wellons. The band is named for the Wilsons’ father, Bill Wilson, a professor at the University of Virginia.

Sons of Bill, a Charlottesville, Va.-based rock band named in honor of the father of three of its members, will perform in concert at Summit City in Whitesburg on Friday night (July 16).

The band has toured with rock and alternative country bands such as Reckless Kelly and the Drive-By Truckers and has performed at the Bonnaroo and Austin City Limits music festivals.

The band’s latest album, the highly-listenable One
Town Away,
was produced by Jim Scott, who also produces Wilco, and has engineered albums for Tom Petty, Radiohead, Sting, The Rolling Stones, Santana and Red Hot Chili Peppers.

For a preview of what Sons of Bill will play Friday, visit sonsofbill. com/2009/09/live-at-thewindjammer isle-of-palmssc/