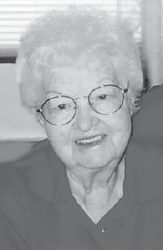 Virginia Lea Whitaker of Ludlow, died February 17 in Covington. She was 94 years old.

She was the widow of William Whitaker.

Funeral services were held February 20 in Fort Mitchell. Burial was in the Highland Cemetery.