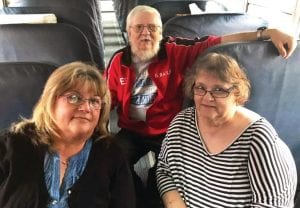 Nancy Ratliff, Garland Ratliff, and Odessa Morton were among several Letcher County school employees who rode school buses this week to deliver breakfast and lunch to children at their homes in neighborhoods all across the county.

Kentuckians are battening down against a storm of bad news related to COVID-19, as schools, libraries, fitness centers and courts closed, the governor ordered restaurants to shut down to dine-in customers to stem the spread of the virus, and investors saw a stock market decline that rivaled Black Monday — October 28, 1929.

As of Tuesday evening, 26 cases of COVID 19 had been confirmed in Kentucky, up from 22 earlier in the day, but the number of confirmed infections appears to be doubling about every three days. The first death in the state was reported on Monday — a 66-year-old man in Fayette County with multiple other health issues.

Dr. Faris Khater, infectious disease specialist at Mountain Comprehensive Health Corporation in Whitesburg, said symptoms in most cases are mild, but can be severe for those with underlying health problems, especially if they have multiple health issues at the same time.

“If a patent with multiple co-morbid conditions is going on air travel and it isn’t necessary, I would avoid it,” Khater said. 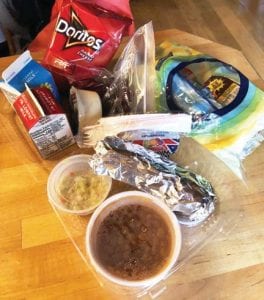 Pictured above are some of the breakfast and lunch items being delivered to school children across Letcher County.

As of 5 p.m. on Tuesday, all state executive branch offices were ordered closed to foot traffic and employees were prohibited from providing any nonessential in-person services outside of government buildings or sites. All sites providing in-person government services were to be closed to the public with the exception of Kentucky State Parks, or except for emergency or life-threatening circumstances, or to provide food, water or medical assistance.

Locally, that means the state office building at Ermine will be closed, as well as any other state offices. The Property Valuation Administrator’s office is among those closed to in-person services, as is the driver’s licensing section of the Circuit Clerk’s office.

PVA Ricky Rose said the office will continue to provide services by telephone, but the door will be locked.

“We’re not closing, but we’re closing to the public,” he said.

Circuit Clerk Mike Watts said his office falls under the administrative office of the courts and will probably remain open except for driver’s licensing, which falls under the authority of the Kentucky Cabinet of Transportation and the Kentucky State Police. That office was to close at 5 p.m. on Tuesday, unless there are further changes, Watts said.

The KSP had already canceled all driver’s license written and road tests as of Monday evening.

As photos appeared online over the weekend of people across the country crowding into bars and restaurants against health officials’ advice, Gov. Andy Beshear ordered all restaurants and bars in Kentucky to close to dine-in customers as of 5 p.m. Monday. Restaurants will continue to serve take out orders, delivery and drive-through, but customers will not be allowed to congregate inside.

Gov. Beshear urged people to order take out whenever possible and support local businesses and their employees.

“We are to the point now where this is a step we have to take. I want to thank everyone that stepped up and did this voluntarily,” he said. “We are asking so many people to make sacrifices. It is not lost on me that most of these are small businesses. We are going to do everything we can to be there for you. We realize the impact this will have and we will be there for you.”

Beshear said the state is taking steps to waive the waiting period for unemployment for those who are losing their jobs because of COVID-19 and will waive any work search requirements while the state of emergency is in effect.

“We know the steps we are taking are going to cause people to lose their jobs,” Beshear said. “We want you to be able to qualify for unemployment and we don’t want to create impediments that keep you from being able to get through this. We are going to make sure we get through this together.”

Meanwhile, all schools and public libraries in Letcher County are closed. Schools will be closed until April 6. The libraries did not open Monday, and are using the time to conduct inventory and clean, and have not announced a re-opening date.

Since many of the children in the district don’t have enough to eat at home, the schools are offering meals to them while school is out.

Letcher County School Superintendent Denise Yonts said meals can be picked up at the schools for anyone 18 or under, and buses began delivering meals along their routes about 11 a.m. Tuesday. Children do not have to be in school, or be enrolled in Letcher County Schools to participate. Jenkins Independent students living in the Letcher County District will be fed by the county district, and county school students living in the independent district will be fed by Jenkins schools, Yonts said.

“We’re making sure any child who needs a meal can get one,” she said.

Jenkins Independent School District telephones are not being answered, however a schedule for food deliveries is posted on the district web site at www.jenkins.k12.ky.us/article/208140.

Judge/Executive Terry Adams issued orders at the end of last week closing the Letcher County Recreation Center until March 30, at which time the situation will be re-evaluated. Youth League games will be cancelled for the remainder of the season, and residents are also being asked not to come to the courthouse if they have:

• Visited China, Iran, South Korea, any European country, or any other high-risk country identified by the Centers for Disease Control within the previous 14 days

• Been asked to self-quarantine by any doctor, hospital or health agency

• Has a fever, cough or shortness of breath.

The judge has also asked people who plan to visit the Sanitation Department office in the courthouse to wash their hands frequently, use an alcohol-based hand sanitizer, avoid close contact and cover coughs and sneezes. Anyone who is sick or caring for someone who is sick or is at high risk are advised to stay home.

Persons would like to pay a bill can mail a check or money order to Letcher County Department of Sanitation, 156 Main Street, Suite 106, Whitesburg, KY 41858.

Bills can also be paid over the phone by credit card, debit card, or using a check routing and account number, or by going online at www.trashbilling.com and entering a 12-digit account number that can be obtained by calling the office at (606) 633-2129.

Adams said Tuesday evening that he taken no other steps yet, but could revisit restrictions today, if it is warranted.

“If we do anything else, it will probably be to limit foot traffic and do everything in the offices by phone.”

In Whitesburg, Mayor James W. Craft said he is already struggling to come up with ways to keep city government operating smoothly while adhering to the CDC recommendation that no more than 10-persons be in the same room. As an example, he cited at the coming April meeting of the Whitesburg City Council, the 10 available seats will be occupied by himself, six council members, two city clerks, and a news reporter. “If I have a single visitor show up, what do I do? We have to meet to pay the bills.”

Kentucky courts have also been closed, with the exception of emergencies, and the Letcher County Jail has canceled all outside services such as AA meetings and church services. Jailer Bert Slone said the only people allowed into the jail will be himself and his deputies, police officers delivering or picking up prisoners, and court and medical personnel.

Other closures in the county are:

Campbell’s Branch/Linefork Community Center has canceled all events for the remainder of the month because of COVID-19 fear, and flu.

Appalachian Regional Healthcare has asked patients to call before coming in for a doctor’s appointment if they have traveled through China, Iran, Italy, Japan, South Korea, or any other location that the Centers for Disease Control has designated as a risk under a Travel Health Notice in the past 14 days. ARH is also asking that patients call before coming in if they are experiencing fever, symptoms of the disease, or if they have traveled on a cruise ship or have been in close contact with someone who has.

Elsewhere in Kentucky, the University of Kentucky has switched to online classes and Berea College has canceled classes for the remainder of the semester. Both schools have told students to leave the dormitories and go home. Gov. Andy Beshear is enforcing strict visitation regulations on state-run nursing homes, and asking private nursing facilities to follow the state’s lead. The state is asking people not to visit nursing homes unless it is a situation in which a family member is dying.