Viruses not the only cause of hepatitis 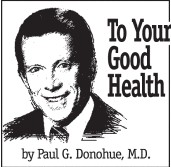 DEAR DR. DONOHUE: For the past year, my wife has had to deal with autoimmune hepatitis. It’s something that hardly anyone knows about or understands, and that makes it even more difficult to cope with. Everyone thinks she has an infection. I can only haltingly explain what she has. Will you tell your readers about this illness? — D.R.

ANSWER: Say “hepatitis,” and people automatically think of a viral infection. Say “cirrhosis,” which is sometimes the last stage of hepatitis, and people think of alcohol as the cause. Not all hepatitis is virus-caused, and not all cirrhosis is alcohol caused. Your wife’s illness is an example. Her liver is inflamed (hepatitis), not from an infection but from an attack on her liver by her immune system.

The reason why a person’s immune system, a system designed to keep us healthy, turns on the liver is obscure. Signs that the immune system is the cause are demonstrable by finding antibodies in the blood. Antibodies are the ammunition the immune system makes to fend off dangerous invaders. One special antibody, the anti-nuclear antibody, is a big indication that the liver has come under an immune attack.

The course of autoimmune hepatitis is unpredictable. It might be mild with few symptoms, or it may take a more aggressive course in which the skin and eye whites turn yellow, where fatigue is immobilizing, where abdominal pain is common and where the skin develops an itch.

Quite often, a liver biopsy is the procedure that provides evidence of autoimmune hepatitis.

Prednisone, one of the cortisone drugs, often is the treatment of choice. It reins in an out-of-control immune system. Another immune-modifying drug, azathioprine, can be added to the regimen. It sounds like your wife is responding well to treatment (from parts of your letter that I had to delete).

The booklet on hepatitis details the various forms of the illness, and how they are acquired and treated. Readers can obtain a copy by writing: Dr. Donohue — No. 503W, Box 536475, Orlando, FL 32853-6475. Enclose a check or money order for $4.75 with the recipient’s printed name and address.

DEAR DR. DONOHUE: What is the procedure for removing a tick attached to your skin? Can you remove it yourself, or should it be removed only by a physician? — T.R.

ANSWER: It’s safe for people to remove ticks on their own. You need tweezers with fine grooves on their lower, inner surfaces.

Don’t bother with popular techniques such as coating the tick with petroleum jelly or applying a just-blown-out match to it.

DEAR DR. DONOHUE: Is Prozac addicting? Can you take it for life? — D.L.

ANSWER: Prozac isn’t addicting, but the drug should be stopped gradually rather than abruptly. People with recurring bouts of depression can take it for extended periods of time.