Vision loss may cause hallucinations 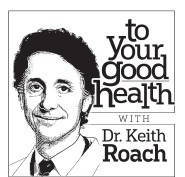 DEAR DR. ROACH: When I lost the vision in my eye in an accident, I had Charles Bonnet syndrome hallucinations. I am 80 years old, and I went completely blind in one eye. There were patterns that I saw whenever my eye was unfocused, which pretty much obscured everything. I saw complicated figures like very bright TV. I have read Oliver Sacks’ explanation in his latest book, called “Hallucinations.” What I viewed is exactly how he described CBS. Seven months later, I am still having hallucinations, but they are much subdued and not very interesting. I think it is gradually disappearing.

What concerns me is that none of the hospital personnel knew of the syndrome. The best that was offered was that it was from a bladder infection, which I did not think I had. I imagine that there are a lot of old blind folks who think they are crazy, and there is no one to tell them otherwise. I am hoping you might write an explanation for all of us who have failing eyesight and no explanation for what ails us. I had so many interesting visions, and since I knew it was not real, I rather enjoyed it. — L.R.

ANSWER: I can’t criticize the doctors at your hospital too much, since I had never heard about this type of hallucination before your letter. In fact, a brief survey of some colleagues, with hundreds of years’ worth of clinical experience, showed me that many of us, unlike Dr. Sacks, had never heard of this syndrome, so I am glad to be able to bring it up.

Charles Bonnet syndrome, also called visual release hallucinations, occur in people who are losing or have lost vision. It does seem to be more common in the elderly, but it has been reported in children. Most people who have had these hallucinations do not bring it up to their doctor, probably because they fear being labeled as having a psychiatric disease. It is thought to happen due to the firing of nerve cells in areas of the brain that process vision when they are deprived of visual input from the optic nerve.

There are treatments available, including moving the eyes rapidly back and forth, which often can stop the hallucinations if they are bothersome. There are also medications to stop them in people who don’t enjoy them the way you have.

DEAR DR. ROACH: A dear friend of mine has been diagnosed with polymyalgia rheumatica and is being treated with prednisone. Can you give me any information about this illness?4— G.O.

ANSWER: Polymyalgia rheumatica is a common illness, almost always found in people over 50. It causes pain and stiffness, especially in the arms and shoulders, and especially in the morning. It responds very well to low to moderate doses (10-20 mg) of prednisone. The prednisone is continued usually for one to two years.

PMR often is associated with a more serious condition, temporal (or giant cell) arteritis. Any symptoms of vision loss need to be evaluated immediately, since permanent blindness can result.

Dr. Roach regrets that he is unable to answer individual letters, but will incorporate them in the column whenever possible. Readers may email questions to ToYourGoodHealth@ med.cornell.edu. To view and order health pamphlets, visit www.rbmamall.com, or write to Good Health, 628 Virginia Drive, Orlando, FL 32803.