Visitors are flocking to sites featuring Lincoln and Davis 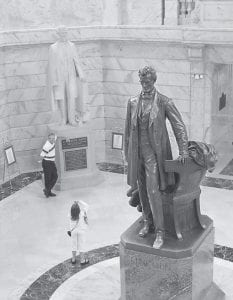 Tourists posed for pictures in front of the Jefferson Davis statue in the Capitol Rotunda as a statue of Abraham Lincoln towers in the foreground in Frankfort last week. (AP Photo/Ed Reinke)

From Abraham Lincoln’s boyhood residence to the Mary Todd Lincoln house, visitors this year are flocking to Kentucky sites dedicated to the 16th president.

But, Lincoln’s Confederate counterpart, Jefferson Davis, is experiencing a similar resurgence. Kentucky, which claims both men as native sons and has statues of both in its Capitol Rotunda, isn’t the only place experiencing a Davis boost.

“It’ll be hard for anyone to approach the level of attention that Abraham Lincoln gets because he’s always classified as one of our greatest presidents,” said Paul Bradshaw, manager at a Davis site in Georgia. “But I think there’s a trend to learn more about the other side.”

Interest in both Civil War presidents seems on the rise, amid a two-year blitz surrounding Lincoln’s 200th birthday next February. This June marked 200 years since the birth of Davis, who served as president of the Confederacy.

Attendance at Kentucky’s Lincoln sites has increased about 18.1 percent, officials say. Lincoln’s boyhood home in Hodgenville, for example, had more than 105,000 visitors in the first six months this year, compared with about 89,000 during the same period last year.

Davis’ memorial in Fairview, in southwestern Kentucky, meanwhile, has seen an increase in visitors by about 12 percent overall for the year, and a nearly 30 percent jump in June, the month he was born, said Mark Doss, the Davis memorial park manager. Doss said the park, which includes a 351-feet tall obelisk honoring Davis, had its “biggest month of June in the history of the park,” tallying about 4,000 visitors.

“It’s to be expected,” Doss said. “There’s a lot of people that study Jefferson Davis and in the last few years there’s been a lot more interest in his role not just in the war, but in his experience before the war.”

Bradshaw, who runs the Davis historic site in Irwinville, Ga., where Davis was captured by Union troops, said he expects about 20,000 people or more will visit this year, compared with the normal attendance of between 12,000 and 15,000 people annually.

Increased interest in the Civil War, combined with the bicentennial events are likely behind the renewed interest, Bradshaw said. People seem to be looking for another perspective and to learn more about Southern his- tory, he said.

“They know about Lincoln and everything he did,” Bradshaw said. “I think there’s a trend that there seems to be people who want to learn more about Jefferson Davis and what happened to him.”

Rick Forte, acting director of Beauvoir, the home in Biloxi Miss. where Davis last lived, said about 4,000 people visited the estate on June 3 for his birthday celebration and grand opening of the home there. Forte said the home, which is now owned by the Mississippi Sons of Confederate Veterans, has also seen more visitors.

“We have seen just an outstanding growth of interest,” Forte said. “Phone calls, e-mails, you name it.”

In Lexington, a town that also boasts ties to both men, the Lexington History Museum has an exhibit featuring both Lincoln and Davis. Jamie Millard, the museum president and CEO, says a record number of people — more than 8,000 — have viewed the museum’s exhibit.