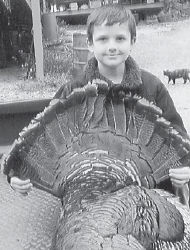 YOUNG HUNTER – Nicholas “Nick” Collins killed his first turkey, a 22-pound bird, last month while hunting with his father and his uncle, Jerry Collins of Blackey. He is the seven-year-old son of Tony Collins and Chasity Collins, both of Isom.

My sympathy to the family of Keith Caudill of Carcassonne. He died on May 7. He was the husband of Tina Jent Caudill and died of a staph infection at Hazard Appalachian Regional Hospital where he had been a patient for about two weeks. He had liver problems and had been in and out of the hospital for awhile now. Keith was 46.

Sandy Adams of Jeremiah, had to be flown to the University of Kentucky Medical Center in Lexington last week. The next day she had surgery on an aneurysm in her head and was on a ventilator. Then they found another one in the back of her neck and were waiting to see how she does with the first surgery before they take care of the other one. She had a stroke on Friday and was put on a breathing machine. All our prayers are with her and the family.

Clell and Clara Riley of Red Star, are back from Lexington. Clell goes for treatments for his cancer and has to stay up to a week. He has to go back on the 14th.

Lola Mae Richardson of Jeremiah, has been in Tennessee visiting with her sister, Louise, who has been sick.

Richard Wright of Indiana, is not doing well. He has cancer and is being cared for by Hospice. Richard is the brother of Linda Collie of Jeremiah. He used to have the furniture store next to Letcher Fire and Rescue.

Happy birthday to my sister, Debbie Fugate; it’s on May 19.

My cousin, Sarah Back, of Lexington, went to New Orleans a few weekends ago with her friend, Jon Grossman. They went for the Jazz Fest and saw Stevie Wonder, Randy Newman, Jimmy Buffet, plus a lot more. They went to Bourbon Street and Frenchmen Street for more good music. During the days they went to visit the River Walk and the New Orleans Art Museum. They ate at Cafe du Monde, which is one of the oldest French cafes in the U.S. Also Sarah said they ate beignets, which are fried French doughnuts. They stayed at Hotel St. Marie, which is on the corner of Bourbon Street and Toulouse Street in the French Quarter. They had a balcony overlooking all the partying going on down below. She said they had a great time. Sarah bought a lot of voodoo dolls to give to the family when she comes in. Sarah is the daughter of Dorse and Debbie Back of Elk Creek.

Letcher County Central High School took some of the seniors to Dollywood on Friday. My son Justin, friends Elijah Caudill and Ben Caudill, along with other students went. They had a good day. Earlier in the week the school took them to a play at Abingdon, Va.’s Barter Theater. They all graduate on Friday, May 16.

Don’t forget about the singing at the Old Indian Bottom Church at the Frog Pond below Blackey that is held the first Tuesday of each month starting at 6:30 p.m. Everyone is welcome.

Happy birthday to Blake Fugate of Blackey. He will be eight on May 15. He is the son of Allen and Sue Fugate.

Friends and neighbors enjoyed the reception at the Blackey Public Library held to meet the artists of the Blackey Art Guild on April 27. The art will be on displayed until May 16. Please take this opportunity to stop by and see the talent of our local artists.

The Blackey Garden Club met May 5 to hear Brandon Centers, a landscaper from Hindman. He was a wonderful speaker and many tips were given to the members and their guests. A good time was had by all who came.