Most years ESPN analyst Dick Vitale believes 12 to 15 teams might have a reasonable chance to win a national championship. This year he thinks as many as 25 teams could have a chance to win six straight games in NCAA Tournament play and a national title depending on pairings.

He believes Kentucky, which has been to the Final Four four of the last five years, is a “dangerous team” again this year despite an inconsistent season filled with various injuries to key players.

“Their up and down play in the interior has been a nightmare for them,” Vitale said. “I mean, the productivity has not been consistent. Right now the pressure for performance and to score on the perimeter players is unbelievable.”

He said Kentucky’s prior inside strength helped spoil UK fans but with guards Jamal Murray and Tyler Ulis — he calls them the nation’s best backcourt — he sees the Cats as a legitimate threat again.

“They’re one of those clubs you don’t know,” Vitale said. “(John) Calipari is a master, as you’ve seen now, in the postseason.” 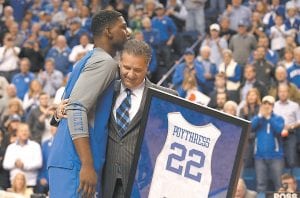 Vitale named Ulis to his All- Rolls-Royce first team, something he admitted he never anticipated doing when the season started when I asked him about that.

He admitted he got criticized for picking Ulis over players like Kris Dunn of Providence, who is projected as a can’t-miss NBA prospect.

“It’s not what you do in the NBA. That doesn’t enter my criteria,” Vitale said. “I rate them as collegians and what they do in college.

“Tyler has a winner’s mentality. His assist-to-turnover ratio is like about 4-to-1. He makes big shots, he makes players better by his presence. He helps to make Jamal Murray better because defenses give help on Ulis’s penetration.

“ His only problem is he couldn’t defend me. I did a little dribbling and I split him changing direction,” Vitale laughed and said.

Since Feb. 1, Murray has been the nation’s top scorer at 25.8 points per game. For the year, he’s averaging 19.9 points per game and on pace to be the highest scoring freshman at UK under Calipari.

“Murray and Ulis together are as good as any combination you can put out there in college basketball,” Vitale said of the duo that averaged 41 points per game in SEC play.

Vitale said part of the volatility during March Madness this year will be because some of last year’s “high school phenoms” have not lived up the hype. He included UK freshman Skal Labissiere in that list even though the last two games Labissiere has shown flashes of brilliance.

“He was projected one or two in the draft and now he is fighting for playing time at Kentucky,” Vitale said. “He had his best game the other night (at Florida) and played only 15 minutes.”

Vitale also said having a healthy Derek Willis back for NCAA play will help UK’s guards because his 3-point shooting stretches the defense.

“If you can get help up front and Labissiere and Willis and (Alex) Poythress give positive minutes and not be a no-show, Kentucky is dangerous,” Vitale said.

He also said seeding won’t be as important as some years.

He Deserves Shot With NFL

At last week’s Pro Day at Kentucky, Paducah linebacker Josh Forrest knew he had to improve the 40-yard dash time he had at the NFL combine. He ran 4.91 and 4.88 seconds, not the times NFL teams want for linebackers.

Never mind that Forrest said he ate something before the combine drills that upset his stomach but he didn’t want to skip the workouts and have teams wonder why he bailed out.

He ran the 40 twice at UK’s Pro Day and was timed in 4.75 seconds both times. He elected not to do the bench press again despite doing only 11 reps at the NFL combine, the lowest number of any linebacker at the combine. He said teams knew he needed to add strength, something UK coaches said for two years, and there was nothing to be gained by doing the bench press again.

“I just wanted to show that I could run better, and I did that,” Forrest, who is being projected as a likely sixth- or seventh-round draft pick, said.

Forrest worked out in Louisiana with defensive specialist Pete Jenkins and now will stay at UK to work with UK strength and conditioning coach Corey Edmond until the draft.

Defensive coordinator D.J. Eliot watched Forrest and other UK players work out in front of scouts from 30 NFL teams.

He’s hoping Forrest gets a chance to play in the NFL.

“He has the talent to play and just needs the right team to give him a chance,” Elliott said. “Hopefully his times today helped him with some teams.”

It’s hard for me to understand why I’ve heard so many talk about the “disappointing” career he had at UK. He’s the 15th player in school history with 800 points, 500 rebounds and 70 blocks. He’s been part of two Final Four teams.

Off the court, he was an honor student. He’s been named to the College Sports Information Directors of America Academic All-America Second Team — the first Wildcat since 1995 to earn that honor. He graduated in three years and has worked toward a Master’s degree this year. He’s been on the SEC Academic Honor Roll every year and is a three-time Arthur Ashe Jr. Sports Scholar.

To me, that’s far from a disappointing career and Calipari agrees.

“He’s such a great kid. The injuries and the things he’s had to overcome, you just root for a kid like that. We’ve had three kids graduate in three years, Alex being one of them,” Calipari said. “There’s a lot of good stuff that’s happened for him.”

And how does he hope fans remember Poythress?

“I think he’s going to be one of those guys that they remember fondly,” Calipari said.

Teammates certainly do as the video tributes from Karl-Anthony Towns, Aaron Harrison and Kyle Wiltjer before the game were all heart-felt and emotional. I thought it was especially nice that UK reached out to Wiltjer and Gonzaga agreed to let him do the video for his former teammate. I also thought it was great that UK fans got to see the emotional, caring side of Aaron Harrison I don’t think they had a chance to see during his career.

When Kentucky lost at Vanderbilt, Calipari insisted he was not worried about his team. Looks like he was right.

The Wildcats bounced back with impressive wins at Florida and then on Senior Day against LSU that brought the Calipari swagger back going into the SEC Tournament Friday in Nashville.

“I don’t know what we are, but the best thing we can hope for is the best version of ourselves and a confident team, an empowered team. Whatever that means it means,” Calipari said. “And we gotta live with what that means.

“I mean there are other really good teams in the country. But right now, you know, if there’s 15 teams better than us, I got to see them. I mean we’re pretty good right now.”

When the Kentucky bigs play like they did last week, Kentucky is maybe better than “pretty good” and that team could make a big tourney push.

So what has turned the season around again?

“Defense. We’re playing great defense. We’re trying to hone in on defense,” Alex Poythress said. “You just gotta stop your man from scoring. You have to have pride about it. It comes down, like, ‘I’m not letting this man score on me,’ and you have to feel that way every time, every possession.”

He says staying healthy — and it seems that both Poythress and Derek Willis are now healthy — is a key to UK’s postseason chances along with paying great attention to scouting reports.

“You’re not going to be able to scout a team for a week, couple days. You find out who you play the day before. You just have to figure out and listen to the coaches,” Poythress said. “Every year you have to pay attention to scouting reports. We just have to make sure we hone in on what the coaches are saying and make sure we understand defensive principles.”