Vitamin E: Safe in diet, not in lungs 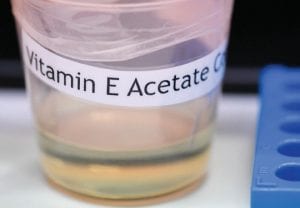 This photo shows a vitamin E acetate sample during a tour of the Medical Marijuana Laboratory of Organic and Analytical Chemistry at the Wadsworth Center in Albany, N.Y. The Centers for Disease Control and Prevention in Atlanta said recently that fluid extracted from 29 lung injury patients who vaped contained the chemical compound in all of them. (AP Photo/Hans Pennink)

The Centers for Disease Control and Prevention recently announced a preliminary finding that implicates a vitamin E additive as the potential cause of lung injury from THC vaping.

The agency examined fluid samples from the lungs of 29 patients with vaping-related illness and found vitamin E acetate in all 29 samples. This is a major development in the search for answers, and it was of great interest to me generally as a public health researcher.

Vitamin E comes from oily foods in our diet. It has also long been known to be important for child development, especially in the womb, where it contributes to healthy lung and nervous system growth, among other things. Vitamin E has eight different isoforms, or types, and each may do slightly different things in our bodies. The kind of vitamin E you get from your diet can therefore vary widely based upon the types of oily foods that you eat.

When we eat vitamin E, it is absorbed by our gastrointestinal tract along with fats. It then travels throughout our bloodstream in the fatty molecules called cholesterol. Finally, it is taken up into our body’s fatty tissues and cellular membranes.

Once incorporated into the body, vitamin E serves as an antioxidant, protecting us from some of the harmful effects of our metabolism and respiration. Antioxidants stabilize what are called free radicals, unstable and highly chemically reactive compounds with extra electrons generated by our metabolism. Free radicals, when left unchecked, can destabilize other molecules around them and cause cellular damage.

When vitamin E comes into contact with certain kinds of free radicals, it transfers that instability onto itself and neutralizes those free radicals.

So, in the aftermath of the vaping illnesses and deaths, an important question emerges: What happens if, instead of eating vitamin E in your diet, you inhale vitamin E, along with a vaporized solution of THC?

I have no idea.

There are only a tiny handful of studies in which someone tried to nebulize, or vaporize, vitamin E in experiments related to lung health. All were animal studies with a small sample size, and none were combined with a THC vaping fluid.

It’s also not clear in this case why vitamin E acetate was added to the vaping fluid, but reports suggest it is used as a cutting agent to make the THC oils less thick. Perhaps someone thought it was safe to do this in an inhaled product because vitamin E was a “natural” vitamin. Importantly, however, many substances that are helpful when taken orally can be harmful when inhaled.

No place for oily molecules

The fact that vitamin E typically has to travel in fat-soluble lipids may perhaps provide a clue as to the harms vitamin E acetate can cause when vaped. Physicians have long known that inhaling oils and other lipids can lead to the deposition of oily droplets in the lungs. They also know that this deposition can in turn lead to inflammation and the potential for permanent lung scarring, respiratory failure or death. It’s not a good idea to consistently inhale particles like small solids or oily liquid drops into your very delicate lungs.

We all know what it feels like to choke on something large enough to block our windpipe. But a small, inhaled particle can go past the large airways and lodge in the tiniest airways and the alveoli that transfer oxygen into our bloodstream, causing damage to these fragile structures.

We may not notice right away that we are being harmed. Only tiny segments of the lung are affected, and our lungs are designed to have some reserve capacity.

But over time, as these small injuries add up, more and more lung tissue becomes involved, and symptoms develop. Such injuries can become fatal. For example, think of the diseases caused by asbestos, silica from sand blasting, coal dust and tobacco smoke.

So, perhaps a vitamin E additive could cause damage in a similar way in this context.

In addition, I believe this is actually a symptom of a broader problem, brought about in part by the 1994 law that allows dietary supplements and some devices to go to market without meeting stringent safety and efficacy standards. Supplement makers don’t have to provide evidence that their products work, and the FDA allows them to monitor the safety features themselves.

It’s a good business – for the manufacturers; dietary supplements sales are estimated to be worth about US$120 billion by 2020. But it may not be good for the American public. By taking untested products, or by using products that are safe in one context but not studied in another, consumers end up participating in millions of uncontrolled experiments in which safety data are frequently absent. There is minimal quality control, minimal oversight – and minimal knowledge of what might happen.

Any type of minimally regulated product that we inhale into our lungs on a regular basis clearly deserves a special level of scrutiny before use. I would argue that any inhaled product should have to demonstrate significant safety data prior to being allowed on the consumer market. Do these products even work? How do they work? If they do work, what’s the right dose so that it’s safe, but still effective? How long can you safely use it? Without that knowledge, we are sailing in dangerous waters with no map.

So, until the day that our poorly regulated, uncontrolled market of self experimentation in lung health comes to an end, I will share a motto that experiments and experience have equally proven to be true. “If you want your lungs to outlast your hair, please don’t inhale anything but air.”

This article, distributed by The Associated Press, is republished from The Conversation under a Creative Commons license. Read the original article here: theconversation.com/vitamin-e-and-vaping-injuries-whats-safe-in-your-diet-is-rarely-safe-in-your-lungs-
126909.