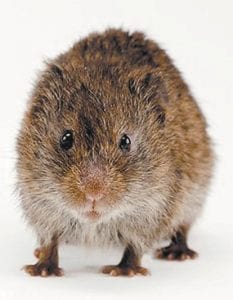 If you have any ideas on how to rid a lawn or garden of voles, columnist Ike Adams wants to hear it. His contact information appears below. (Smithsonian Photo)

After we’d spent the better part of all the warm and hot weather one entire year back in the early 1990s unsuccessfully trying to eradicate voles from our yards, the late Junior Helton finally announced there were only two ways we would ever be rid of them. “We’ll either have to pack up house and move away or die and leave ‘em,” he said.

Junior and I had tried different kinds of poison including fake worms laced with Eagle-7, poisoned peanuts, castor beans and regular old rat and mice bait. We planted different kinds of lilies and other bulbs that were supposed to do the trick. We tried mothballs and “Snake Away.” We dumped rank, well-used cat litter on their tunnels.

We spent way over a hundred dollars on castor oil that was nearly five bucks for a four-ounce bottle. Two bottles castor oil and half a cup of dish detergent mixed with a gallon of warm water sprayed on the ground was supposed to run them off.

Junior’s yard was pretty small, only a few hundred square feet at the most, but mine was well above two acres. A gallon of the castor oil solution hardly made a dent in all the square footage I needed to saturate. Junior found a place in Harrodsburg or Stanford, I forget which, that could get castor oil by the gallon for somewhere around 20 bucks a gallon. A gallon purchased in the little drug store bottles would have cost over $150.

So we bought five gallons. It came in big glass jugs. We mixed the solution up in a two-gallon garden water sprinkle can and spent one entire Saturday afternoon applying it to my lawn. Junior’s yard only took about 10 minutes. Then we drove my truck all over the yard to flatten down the mole’s tunnel ridges.

Every time we saw the ground start to move as a result of subterranean activity, we shot into it with a .22 rifle and actually dug up several dead voles. We also left a bunch in the ground, figuring that if the castor oil didn’t run them off, maybe cold-blooded murder would send a sterner, more effective message.

Two weeks later my lawn had, I’m guessing, more than a mile of new mole tunnel ridges crisscrossing it and Junior’s was, likewise, still conspicuously inhabited. Apparently the voles thought the castor oil was nothing more than room deodorant or salad dressing or sauce to go with whatever they were eating underground. They also showed no visible grief for their massacred brethren.

One day Junior suggested that we might be able to smoke them out with fumes from one of our trucks, so I went out to an auto parts place and procured a section of flexible exhaust pipe. Because Junior’s old F-250 Ford truck was already burning just enough oil that it emitted visible smoke when the motor was running at a fast idle, we connected one end of the flexible stuff to the truck’s tailpipe and dug out the end of one mole tunnel where we inserted the other end before starting the truck back up.

It was late in the afternoon, maybe an hour before dark and the smoke was rising across my yard like fog forming a low-lying cloud. It was really easy to spot the tunnel ridges that were not secreting any smoke so we switched entrances a few times after 15 or 20 minutes in each location.

Sure enough, the next morning there were three or four flattened mole carcasses lying on the highway in front of my house and a couple in our gravel driveway that had been killed by the fellows who had come to feed the cattle just after daybreak.

Our niece, whose name I won’t mention because I want to remain being her favorite uncle, came over to have lunch with us and saw one of the inebriated, but still alive, voles struggling to get across the driveway. While I ran to grab a spade that I intended to use to kill it, she began yelling that I was going to do no such thing. She grabbed a shoebox out of the trunk of her car and somehow managed to capture the varmint without getting scratched or bitten. She never did tell me what she did with it, but I’m reasonably sure she didn’t take it home to her own yard and I know, for sure, that she wouldn’t kill it.

Anyway, not long after I had borrowed a 300-pound soil compacter and smoothed our lawn back down, the voles returned. So we heeded Junior’s advice, bought our current home and moved away and left them.

Now, after nearly 20 years of peace and freedom from voles we have been invaded again. Our front yard resembles a vast but miniature chain of mountains. The invasion has only taken about 10 days and I have no idea how to repel it because nothing in my experience with fighting voles has ever been truly successful for the long haul.

I believe that I asked for reader help during last time mole war, but I have long since forgotten what you told me so I am pleading for help, yet again. We are getting desperate here in fear of the voles eating all our tulip bulbs.

If you have ever waged a campaign that successfully got rid of all the voles in your proximity, please tell me how you did it by emailing ikeadams@aol.com or writing to 249 Charlie Brown Road, Paint Lick, KY 40461.

There’s no sense in calling me unless you enjoy yelling and hearing, “What’s that? Could you say that again, please?” etc., because Mr. Parkinson is essentially deaf when it comes to using the telephone.