Vols no match for Cats 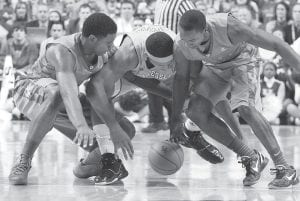 “My teammates always tell me, ‘I’m going to hold them down, then you just come over and block their shots.’ They really depend on me to block shots or at least alter shots,” he said.

It’s certainly not the only thing they count on him for.

“I know I’m going to have to be tough in order for us to win games,” Davis said.

Conference) got off to a sizzling start by hitting its first 11 shots over the opening 11 minutes as the Wildcats won their 14th straight overall in another dominating performance.

The 6-foot-10 Davis has been the biggest star among the Wildcats’ starting group of three freshmen and two sophomores who expect to play for a national title in a little over two months. 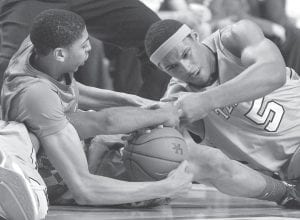 Coming off a 24-point win at LSU on Saturday, the Wildcats may finally have ended the overtly physical game plan SEC teams have tried using against them.

“We want to be the aggressor,” freshman Marquis Teague said. “We don’t want people to come at us and push us around.”

The Volunteers (10-12, 2-5) were led by Renaldo Woolridge, who hit a career-best five 3-pointers and tied his career-high with 17 points.

Kentucky holds the nation’s longest home winning streak and wore platinum gray uniforms instead of their standard white as part of a Nike promotion with eight other programs in men’s and women’s basketball.

The uniforms made it tough at times to pick up who was scoring for the Wildcats. No matter, everyone has pitched in equally this season for a club that features six players averaging 9.9 points or more.

“We play with a lot of intensity, even when guys come off the bench,” Davis said. “We never miss a beat, we just keep going and going like Energizer bunnies.”

Freshman Michael Kidd-Gilchrist had 16 points and eight rebounds, Terrence Jones scored 11 points and Doron Lamb and Teague had nine apiece for the Wildcats.

The Vols’ main inside presence, Jeronne Maymon, scored 13 points, but picked up his fourth foul with just over 12 minutes to play. With Maymon gone, Davis feasted down low, blocking his seventh shot of the game when he rotated and swatted Kenny Hall’s attempt.

“A guy like that, they come along once in a lifetime,” Tennessee coach Cuonzo Martin said. “He just changes the game for you. You can do more things on the perimeter, you can pressure more, you can push guys in to him and make plays. He is a presence down there.”

Davis has an NCAA-best 108 blocked shots this season to help Kentucky lead the nation. He made six straight free throws before hitting a 17-footer that gave Kentucky a 57-36 lead with 6:52 left.

He scored the first two baskets of the game, then stepped out and hit another long jumper as Kentucky built a 10-2 lead at the first media timeout.

With just under 14 minutes left, Jones went hard to the basket, scored and drew a foul. With both teams congregated in the paint, pushing and shoving started before officials separated the sides.

Trae Golden and Davis were assessed technical fouls, and Davis drew an offensive foul on Hall on the ensuing possession that fired the Wildcats up even more.

“Coach Cal always wants us to have each other’s back, we’re not going to have one guy just getting pushed around,” Davis said, referring to coach John Calipari. “We got into a little scuffling, argument, but after that, we were just like, ‘Let’s stop talking and let our game talk.’”

Kidd- Gilchrist was fouled on the next possession and made both free throws, Teague added another and Kidd-Gilchrist’s layup gave Kentucky a 22-5 lead with 11:39 left in the first half.

“We all got pumped up,” Teague said after the technical fouls. “We were ready.”

Vols freshman Jarnell Stokes picked up his second foul 25 seconds later to go to the bench and Tennessee’s best three players — Stokes, Maymon and Golden — watched the rest of the half because of foul trouble.

Darius Miller’s jumper gave Kentucky a 26-8 lead, but he missed a 3-pointer to snap the Wildcats’ perfect start with 8:57 left in the first half.

“It hurts you a little bit and your confidence,” Tennessee guard Josh Richardson said of Kentucky’s start. “ They play great defense and they come out and hit stuff you have never really seen before.”

Woolridge answered with consecutive 3-pointers that cut Kentucky’s lead to 32-22 and was 5 for 5 from 3-point range at that point, while his teammates were 3 for 19 from the field.

The Vols never cut the lead to single digits as Kentucky answered with six straight points and led 38-25 at halftime.

Tennessee is 4-12 alltime against the nation’s top-ranked team including a win against No. 1 Kentucky in 1966. The Vols had won its last two games when facing No. 1, but this group never had a chance after shooting 28.1 percent at Rupp Arena.