Plastic bottle may have been a ‘meth lab’ 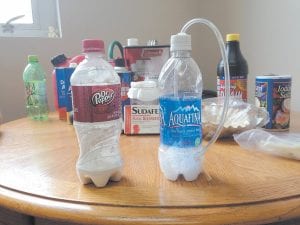 Bottles similar to the two bottles seen in the photo above are often discarded after being used in the making of methamphetamine. If found, don’t pick up a bottle containing meth byproducts, warns Letcher County Sheriff ’s Deputy Eugene Slone. The bottles are still dangerous and are health hazards. Call police if you come upon a meth lab.

Methamphetamine use is on the rise in Letcher County and police warn those who participate in roadside trash pickup events to be on the lookout for discarded items used to make meth.

After meth is cooked down, the 20- ounce bottles, which are used in making the meth, are often thrown out. Slone said the bottles are still dangerous.

“Ninety-nine percent of the time it is going to be a Mountain Dew bottle,” said Slone.

A plastic bottle with tubing coming out of the top is known as a gas generator. A mixture of salt, hydrochloric acid and/or fertilizer is placed inside the bottle to produce a gas, which can burn eyes and cause lung damage.

A plastic bottle with a power-like substance in it is known as the shake and bake one-step method. If such a bottle is found, Slone said not to pick it up.

“If you pick it up and shake it, it can regenerate, explode and release a toxic gas,” said Slone.

“If they find what they suspect may be a meth lab, get away from it and report it to law enforcement immediately,” said Slone.

Always wear rubber gloves and safety vests when picking up litter near roadways.