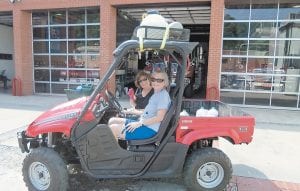 WATER TRUCK — Volunteers Lee Anna Mullins, driving, and Jolinda Wright were photographed in an all-terrain vehicle they have been using to water flowers planted in barrels along Main Street.

Four Whitesburg sororities, several downtown businesses and the City of Whitesburg each have helped in bringing flowers back to Main Street.

While traveling through Nicholasville last year, Jolinda Wright’s attention was on baskets of flowers instead of eyesores.

“I failed to notice all the empty businesses,” said Wright. “I concentrated on the windows and as with a lot of downtowns there were many vacant buildings.”

Wright mentioned her observation to Lee Anna Mullins and they decided to see if flowers could be planted on Main Street in Whitesburg.

When Becky Johnson lived in Letcher County in 2009, she planted flowers in barrels downtown and tended to the flowers while her husband Art Menius was director of Appalshop. The couple has since moved out of the county and the barrels have been flowerless for a few years.

Along with some help, Wright and Mullins planted flowers back in those barrels as well as several new barrels located throughout downtown. 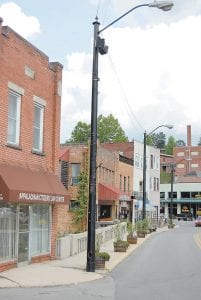 Barrels of flowers planted by volunteers with the City of Whitesburg line the bridge across the North Fork of the Kentucky River on East Main Street. (Photo by Sally Barto)

“The city government has been very supportive of our efforts,” said Wright. “It takes involvement from all people in the community to make the community a place to be proud of. It takes a village to make things happen.”

Members of the Whitesburg Fire Department filled the barrels with dirt. Sorority members and others planted the flowers.

Members of the fire department repurposed an old water tank and attached to a utility vehicle to assist with watering and fertilizing the flowers.

Businesses with barrels located nearby have watered the flowers since May.

Mullins and Wright fertilize the flowers once a week.

“The barrels are trial and error on what plants will work well in the hot sun,” said Wright.

The flowers haven’t bloomed as much as Mullins and Wright had anticipated. What’s the reason? Hot weather? Types of flowers? Soil?

The women aren’t giving up. They are already brainstorming what types of flowers to plant next spring.

“With all the art the tourism commission has displayed in downtown, the flower barrels should just be another step in showcasing our little town,” said Wright.