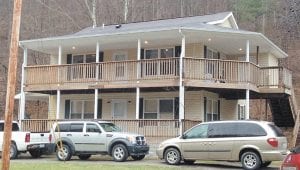 A ribbon-cutting ceremony was held at the shelter at Goose Creek last week.

A group of Letcher County citizens have raised $11,000 to start a homeless shelter in Goose Creek.

Diane Watts, of Colliers Creek in Partridge, organized a community meeting on March 19, 2014 at Eolia Christian Community Outreach (ECCO) to get input on whether a homeless shelter is needed in the county. With a crowd of about 50 people, attendees representing healthcare organizations, an assistance program and law enforcement voiced a need for a shelter, Watts said.

Watts credits Brenda Gross, director and founder of ECCO, and District One Magistrate Bobby Howard with having the idea to open a homeless shelter in Letcher County.

Letcher County Sheriff ’s Deputy Eugene Slone estimates that three homeless people a month travel through the county. People displaced from emergency disasters such as Hurricane Katrina have found their way to the county.

“People going from point A to point B somehow end up in Letcher County,” said Slone. “Usually you’ll find them around the intersection at McDonald’s. We’ve received calls of people living under bridges.”

A committee was formed and the group raised money by raffling off a birdhouse and organizing roadblocks. A pancake breakfast, spa- ghetti dinner and radio auction were also held.

“Together this group has made it a reality,” said Watts.

Brenda Gross suggested that the name of the shelter be Saving Grace Homeless Shelter.

“Saving Grace is totally operated on donations and volunteers,” said Watts, director of Saving Grace Homeless Shelter. “We are in great need of both.”

The top level of a duplex located at 1925 Highway 317 and owned by HOMES, Inc. is being utilized as a homeless shelter. Since February 25, the shelter has been used six times.

“Saving Grace is all about lending a helping hand to our fellow man who is down on his luck,” said Watts.

With the support of local churches and other organizations the committee has long-term plans for the shelter to become larger.

The non-profit organization has a list of 30 volunteers willing to spend nights at the shelter when needed. Volunteers sleep in one room and those in need sleep on bunk beds in a separate room. The shelter is open from 7 p.m. to 7 a.m. when someone is staying at the duplex.

“It is rewarding because it is helping someone else,” said Jimmy Scott, a volunteer who has recently spent a night at the shelter. “It actually went real well.”

Scott said he made breakfast for the person who stayed at the shelter.

Committee members want the people who utilize the services of the homeless shelter to make themselves feel at home, Watts said. A refrigerator is stocked with food and those in need are encouraged to fix themselves something to eat.

A washing machine and dryer are available at the shelter. Scott said people are happy to be able to shower.

Each person coming to the shelter is given a disposable blanket and a road trip pack with a washcloth, personal hygiene items and snack foods.

Pajamas, underclothes, and other donated clothing are available for those who stay at the shelter to take with them. Coats, gloves, scarves and hats are also given out.

“We’ve been very fortunate with people donating out of the goodness of their hearts,” said Scott.

People can stay one week at the shelter and then their situation will be reevaluated.

Donations to Saving Grace Homeless Shelter can be made at Whitaker Bank in Whitesburg.