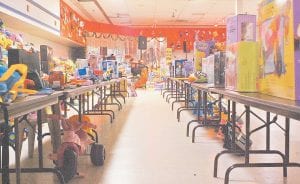 If you’re on the lookout for a little Christmas spirit this holiday season you can find it in the old Food World building in Whitesburg. Marlow Tackett’s “Christmas for the Needy” begins giving away toys, clothing, food, furniture, appliances and much more at 10 a.m. on Sunday (Dec. 18) and continues until everything is gone.

According to Tackett, the embodiment of the Spirit of Christmas himself, they could be there for two days, “or ten, depending on when people stop coming in.”

The atmosphere in the old Food World building is what one imagines the North Pole might be like at this time of year. Volunteers sort through donations while wearing Santa hats; two volunteers, Brian Tackett and Paul Couch sit near the front door strumming a guitar; laughter and Marlow’s friendly voice echo through the old grocery store and people regularly stop by to drop off donated goods or to just say hello and offer a hand.

Tackett said Letcher County has, “supported me like no other place has before; almost everything in here has come from only a 20 mile radius.” As of Monday, they had just received a large shipment of toys worth more than $5,000. Tackett said they were also expecting a truck to deliver 25,000 cans of food and eight tons of potatoes. 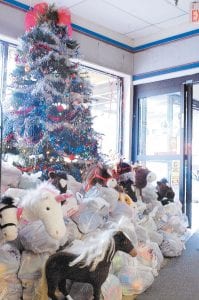 Presents were piled high under and around a large Christmas tree (above) as volunteers (below) worked to get ready for Marlow Tackett’s “Christmas for the Needy,” which will open Sunday morning at 10. (Photos by Marcie Crim)

If the numbers don’t impress you, a tour through the building proves just how large this event is. Couches, refrigerators, strollers and highchairs share space with children’s and adult’s clothing and knickknacks of all sorts. But it’s the toys that make the largest impression. A mountain of brightly colored playthings almost reaches the grocery store’s high ceiling. Small sounds — dolls crying, toy cars murmuring — are heard as pressure from the pile activates buttons and switches. Tables are lined up and piled high with puzzles, science kits, dolls and remote controlled vehicles. Bicycles of all sizes and colors line the walls waiting to be taken home for Christmas. 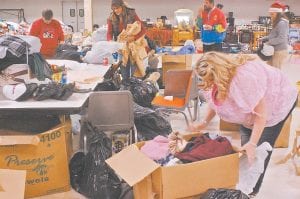 Marlow Tackett’s “Christmas for the Needy” is in its 33rd year and boasts dedicated volunteers. Some have been with Tackett since the beginning and others, like Becky Hayes, have been coming from as far away as Smithfield, Virginia near Virginia Beach, for the last 12. Marlow said more volunteers are welcome to help sort and organize in the days leading up to Sunday and also to help hand out the donated goods starting on the 18th. All he asks is that you bring your own Santa hat and a jolly disposition.

The event kicks off with a Christmas concert, donuts, coffee and juice. Beginning at noon folks will begin moving through lines to receive food, clothes, toys, etc. There are plans to keep the kids entertained with contests and snacks.