Voodoo festival unlike any other 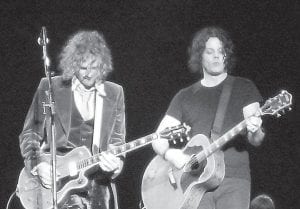 RACONTEURS AT WORK — Brendan Benson (left) and Jack White performed with their band The Raconteurs at the Voodoo Music Experience, attracting one of the largest crowds during the three-day event.

A cold front left the normally warm city of New Orleans bitterly cool and damp on the first day of Halloween weekend. Though the natives were not adjusted to the day’s cool climate, they went with the flow (as most do in The Big Easy) and threw on a jacket over their Halloween costume. After all, they were headed to the Voodoo Music Experience, a three-day celebration of art, Louisiana culture and most importantly music as rich and flavorful as the city’s spicy cuisine, and nothing would get in the way of their good time.

As the crowd roared in wearing bright Halloween costumes it was clear to see this festival was unlike any other, but the audience members weren’t the only ones to partake in the Halloween celebration. Acts like My Chemical Romance dressed up as medieval knights, The Limousines dressed as skeletons, Girl Talk dressed as the ultimate terror Freddy Krueger, and the Wombats stole their costumes from the crowd, all embracing the festival’s Halloween theme. That, set against the spooky background of New Orleans’ century old City Park, left concertgoers in a very festive mood.

With the Voodoo Experience marking its 13th birthday celebration this year, a few bumps in the road were expected. Though festival organizers promised a strong lineup, the prospects of one were highly doubted. That was until the performers were announced individually over a two-month period. By the time the full lineup was announced it was clear that Voodoo would not disappoint, scheduling not only alternative acts but also hard rock, blues, rap, bluegrass and the genre that made the city famous, jazz. These acts included My Chemical Romance, Blink 182, Soundgarden, Mastodon, The Raconteurs, Snoop Dogg, Honey Island Swamp Band and The Preservation Hall Jazz Band.

Among the artists at Voodoo was a renowned European band that is gaining some popularity in North America, The Wombats. The trio was one of the first groups to play on one of the smaller stages that weekend and though their crowd was not the largest of the night they played as if they were performing in front of a sold out stadium. With their high energy set, the band had brought with them weak attempts at costume that just included painted faces that looked like pirates and lions. Feeling a bit outdone by their fans, they quickly asked to borrow some of the more unique costumes that their followers sported, including a penguin costume, a grandma wig, and an animal hat. Before the enjoyable chaos that came along with the band’s hour long set had begun, lead singer Matthew Murphy predicted what was to come by saying, “Stand back because things are about to get epic!” These words would go on to summarize the entire festival weekend.

On the opposite end of Voodoo’s diverse spectrum were The Raconteurs. A well-known blues rock band that was formed by Jack White of the indie rock duo The White Stripes, singer Brendan Benson and Kentucky’s very own “Little” Jack Lawrence of the Cincinnati band The Greenhornes, the group served as the weekend’s closing act on the main stage and played in front of what was possibly the largest crowd of the entire festival. Though the foursome did not wear Halloween attire of any kind, they played a two-hour long show that was not bland to say the least. White, showing just what a skillful musician he is, not only played three different guitars but also went on to play the keyboard and the fiddle while singing a majority of the group’s songs. By the time The Raconteurs had gone through their 13 songs plus a three-song encore the crowd was begging for more but eventually accepted the fact the weekend’s festivities were over.

By Halloween day a large percentage of people in New Orleans had stuffy noses and colds — not only because the city had gone through a cold spell, but also because of those who had braved the elements and refused to miss what would be one of the best Voodoo Festivals yet. Though they had the sniffles on Halloween, they shared total apathy for their situations because they had such a great weekend. The Wombats’ Matthew Murphy had been right when he warned the audience about how epic things would get, because they truly did.