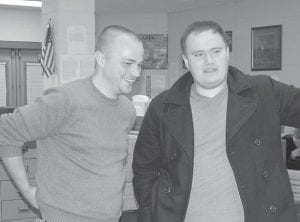 COIN TOSS WILL DECIDE RACE — First-time city council candidate Matt Butler (right) and Tom Sexton shared a laugh Tuesday night after learning they were tied for the sixth seat on the Whitesburg City Council. The race apparently will be settled by a coin toss. (Photo by Sally Barto)

Whitesburg will be getting one new council member, but who that is won’t be known until a coin toss can be held between Matthew Thomas Butler and Tom Sexton, who each received 282 votes. Letcher Court Clerk Winston Meade said county election results will be certified by the Letcher County Board of Elections on Thursday. Meade said a tie hasn’t occurred in the 14 years he has served as court clerk and he is unsure when a coin toss will take place. Meade said it could possibly happen in the next couple of weeks.

Re-elected to the Jenkins council are Richard Damron with 421 votes, Carol Anne Litts with 402 votes, Chuck Anderson with 382 votes and Rebecca Terrill Amburgey with 343 votes.

Garnett Bentley had 320 votes and Roy Triplett had 255 votes.

A race for six seats on the Fleming-Neon City Council was also on the ballot, but none of the positions were being contested. Challenger Linda Cantrell joined incumbents Robert Champion, James D. Collins, Thomas D. “Tom” Haynes and Trey Quillen on the council. Quillen garnered 177 votes. Cantrell and Haynes received 169 votes each. Collins and Champion each had 155 votes.

Incumbent Will T. Scott won the battle against Janet L. Stumbo for Justice of the Supreme Court (7th District). Scott of Pikeville received 4,476 votes in Letcher County and Stumbo, of Prestonsburg, who is the present Court of Appeal Justice, received 3,288 votes.

Scott had made a campaign issue out of Stumbo’s last name, questioning why she was not using her married name of Pillersdorf. Voters in the region still strongly believe wives should take their husbands’ last names.

The 58-year-old Stumbo was the first woman elected to the Supreme Court in 1993. She was re-elected without opposition, but was defeated by Scott in her bid for a third term.

By a large margin county voters approved a constitutional amendment which asks, “Are you in favor of amending the Kentucky constitution to state that the citizens of Kentucky have the personal right to hunt, fish and harvest wildlife, subject to laws and regulations that promote conservation and preserve the future of hunting and fishing, and to state that public hunting and fishing shall be a preferred means of managing and controlling wildlife?” The vote was 6,811 in favor of the amendment and 634 against. The amendment also passed statewide.

The results of Tuesday’s presidential race here indicates that at least 921 voters left Obama, who has been accused of hurting the coal industry, and threw their support to Romney instead. In 2008, when Obama easily won election to the White House nationwide, the final tally here was 5,367 for Sen. John McCain and 2,623 for Obama.