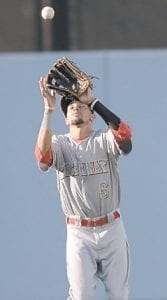 As we head toward the end of the second full month of the 2014 Major League Baseball season, the Cincinnati Reds remain stuck in third place of the National League’s Central Division. The team had a won-loss record of 22-27 heading into Tuesday night’s game in Los Angeles and has basically been treading water for the last four weeks.

The main reason for this diffi- cult period of time for the pride of the Queen City is the team’s having had to field a Mash unit since Opening Day. The teams No. 2 starting pitcher, Matt Latos, has yet to toe the mound, and it appears he won’t until early June at best. The team’s stud closer, Aroldis “The Cuban Missile” Chapman, was just 10 days ago finally activated from the disabled list.

Offensively, it’s been a real struggle, yet, since basically the third week of the season you haven’t been able to place much of the blame on the team’s new leadoff hitter, Billy Hamilton. He is the rookie speedster in centerfi eld who everyone thought would struggle to get going this season.

The offensive struggles start and end with the team’s two highest paid players — first baseman Joey Votto and right fielder Jay Bruce. Both have been on the disabled list at least once already this season, and Votto resides there as we speak with the Reds out West for one of its most difficult road trips of the season. Votto can’t be activated until the team returns for its opening homestand of June.

Now the Reds’ hottest hitter, catcher Devin Mesoraco, who was hitting over.400 when he went on the DL just returned and was miredina1for23slumpgoing into Tuesday night’s play. Since misery loves company, Jay Bruce’s uniquely quick return from his knee surgery evidently hasn’t done anything for his recovery at the plate, as he was 1 for 11, striking out nine times against the division rival St. Louis Cardinals this past weekend.

While it is still not time to hit the panic button, it’s beginning to frustrate many longtime Reds fans who have never seen their favorite team win a playoff game in Great American Ball Park. Yes, that’s an accurate statement.

As a matter of fact, if you’ll trace back through the record books you will see that the Reds have actually won the last eight World Series games in which they have played (1976 vs. New York Yankees, 4-0 sweep and 1990 vs. Oakland, 4 – 0). Counting the seventh game of the 1975 World Series versus the Boston Red Sox, the Reds have won nine Series games in a row, but not a single post-season game at GABP has ended with the home team celebrating.

At best, it appears the Reds are headed toward another hapless post season. This year, they may be out of contention by the All-Star break if some lightning doesn’t strike the Reds’ bats in the coming weeks.

Normally when late May rolls around, most of the True Blue members of Big Blue Nation are turning their interest and thoughts toward basketball and/or football recruiting service reports on the elite players that UK is reported to be after.

With both the UK softball and baseball teams locked into solid post-season runs this early summer, those UK fans who are truly UK fans and not just football or basketball junkies have an opportunity to follow two of Athletic Director Mitch Barnhart’s most prized projects over the last five years come to fruition.

It has been a passion of Barnhart’s to make UK a successful and well-rounded athletics department and the fruits of his labor are finally paying off with the help of hardworking staff member like softball coach Rachel Lawson and baseball coach Gary Henderson.

Lawson’s softball team will be making the school’s first-ever appearance Thursday evening in the NCAA women’s softball college World Series in Oklahoma City, Oklahoma. The Wildcats will play Louisiana-Lafayette at 7 p.m. on ESPN2. UK enters the game with a 49-17 record which is the school’s all time best.

Gary Henderson’s hard charging baseball team just finished storming through college baseball’s most difficult conference tournament at a 3-1 clip, which earned them an at-large bid in the NCAA baseball tournament.

Henderson’s Bat Cats finally got a favorable seed both in firstround competition and location. UK opens play just one hour down 1-64 at Jim Patterson Stadium on the UofL campus. UK will open the Louisville regional at 2 p.m. against the Kansas Jayhawks. There is no TV broadcast, but you can pull the game up live on the www.espn3.com Internet site.

Host Louisville will play Kent State later Friday at 6 p.m., and the two winners and losers will play each other on Saturday again at 2 and 6 p.m., with Saturday’s firstgame winner playing Saturday’s second-game loser Sunday at 6 p.m. in the double elimination tournament.

The Louisville regional winner from this weekend will play the Nashville winner the following weekend in a best two of three super regional series, with that winner advancing to the College World Series in Omaha, Nebraska the second week of June.

Visit www.ukathletics.com for tickets to the first round regional in Louisville.