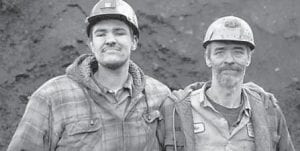 WVVA reported that 51-yearold Andy Christian Sr. of Premier died Sunday at a hospital in Roanoke, Va. The death was confirmed by Fanning Funeral Home of Iaeger, which is handling arrangements.

Known as “The Legend,” Christian was one of the miners at Mc- Dowell County’s Cobalt Coal, the company that was spotlighted in Spike TV’s 2011 reality series.

According to his biography on Spike TV’s website, Christian was a third-generation coal miner. He worked as a miner operator for Cobalt.

Christian is survived by a wife and two sons, one of whom, Andy Christian Jr., also had a role in the TV series.

Funeral services will be held Sept. 27 at the Ark of Safety Church in Roderfield. Burial will follow at Christian Cemetery.