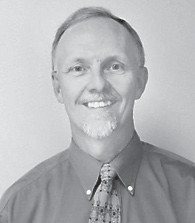 Whitesburg architect Jack Waddles is one of three men named as new partners with Summit Engineering of Pikeville.

Waddles, who had charge of designing the Letcher County Recreation Center in Whitesburg, has been with Summit for five years, serving as director of Summit Architectural Services since 2008.

A graduate of Kent State University in Ohio, Waddles is a member of the American Institute of Architects (AIA) of Kentucky and East Kentucky, the AIA Kentucky Committee on Architecture for Education, and the AIA Academy for Justice. He is a registered architect in Kentucky, West Virginia and Virginia.

Waddles and his wife Kathleen live in Whitesburg. They are the parents of three children, Morgan, Jason and Courtney. He is a member of the First Baptist Church of Whitesburg, where he serves as a deacon, teacher and youth leader.

The promotion of Waddles was announced recently by Summit president and chief operating officer Jack Sykes. Also named partners in the firm were professional engineers Philip Elswick of Pikeville and Jody Hunt of Johns Creek.