Day was photographed after winning the pole position for a race earlier in his own career as a driver.

Did you know that this year’s Daytona 500 winner, Trevor Bayne, has a Letcher County connection?

Many sports writers have commented that the rookie’s spectacular win may be the spark that reignites interest in NASCAR, and the sport can thank Bayne’s mentor and former crew chief, Whitesburg native Wade Day, for helping to make the improbable happen.

“That was amazing!” Day said of his protégé’s win while driving for the Wood Brothers racing team on Sunday.

Day, who started his own racing career on weekends while he was earning his AAS in Mechanical Computer-Aided Design at the Sullivan College of Technology and Design in 1991 (then known as Louisville Technical Institute), is a two-time NASCAR Weekly Racing Series regional champion who owns several track records himself.

Day, 38, pointed out that Bayne, the first of several up-and-coming drivers he has trained, is only the second driver in Daytona 500 history to win his first time driving in the fabled race. 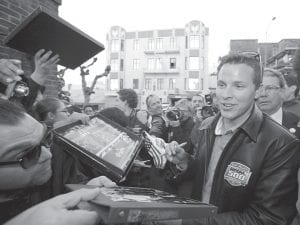 NASCAR driver Trevor Bayne, who just won the Daytona 500, was mobbed by fans while making his way into Ghirardelli Square in San Francisco on Tuesday. The visit was part of the official countdown promotion for the Toyoto/Savemart 350 NASCAR Sprint Cup auto race held in Sonoma, Calif., in June. (AP Photo)

In addition to the racing in the NASCAR Weekly Series, Day is a former ISCARS Dash Series champion and raced in the USAR Hooters

“The seminars are something that I just started this year,” Day said. “Teaching or at least sharing my information with competitors, friends, or pretty much anyone who asked, is something that I have always done.”

He still regularly utilizes the skills he learned in the classroom in Louisville. “I use algebra, trig, and geometry almost on a daily basis,” Day says. “My favorite class was physics.”

While Bayne moved on to the famous Wood Brothers team in November, Day already has another apprentice waiting in the wings — 13-year old sensation Blake Jones, who won the Late Model Stock Car division at Lonesome Pine Raceway at Coeburn, Va., in 2010. It was Jones’ fifth championship in five years. He also won rookie-of-the-year honors.

In addition to passing on inventive training and tactics, Day also puts his CAD (computer-assisted design) skills to good use designing industry-changing tools to give his racers an edge. He designed a self-contained pull-down rig, a device that allows technicians to precisely and dynamically custom-tune the characteristics of the car like alignment, toe, Ackerman, caster, camber, bump steer, and more, to ensure maximum performance on a given track.

“This type of tool has never been able to be taken to the race track,” said Day. It also saved the garage nearly $65,000 over comparable devices. As a crew chief, Day uses this pull-down rig and his racing experience to maximize performance on the track.

“I was able to work on the projects from start to finish, including the testing for FAA approval,” he remembers fondly. That same start-to-finish process is what still intrigues him today.