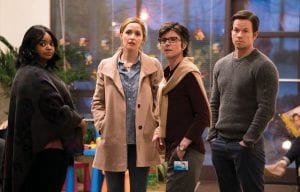 Octavia Spencer, from left, Rose Byrne, Tig Notaro and Mark Wahlberg are shown in a scene from “Instant Family,” based on director and co-writer Sean Anders’s own adoption experience. (Paramount Pictures via AP)

Mark Wahlberg may be known for his tough-guy image thanks to movies including “Mile 22” and “The Departed,” or for his straight-up comedic roles like in “Daddy’s Home” and “Ted,” but he tugs at the heartstrings in his latest movie, “Instant Family.”

“Instant Family,” which arrived in theaters November 16, stars Wahlberg and Rose Byrne as a married couple who adopt three siblings, the oldest of whom is a teenager.

There are lots of funny moments showing the challenges facing a couple taking in three kids and trying to learn to parent on the spot, but Wahlberg said the filmmakers were very careful to be respectful of the process.

“We always talked about, ‘Is this too much? Is this pushing the envelope a little too far?’ It can be really hard and it’s honest in that way that there are a lot of great times, there are a lot of difficult times, but ultimately it’s so rewarding and that’s what it’s all about. It’s all about faith for me and family.”

The story is based on director and co-writer Sean Anders’s own experience of adopting three siblings.

“The movie is obviously very important to me because it’s not only my own journey, but it’s also inspired by a lot of stories of real adoptive families that I met along the way,” he said.

Anders said they also wanted to pull from other people’s stories of fostering and adoption.

“We were trying to really bring in as diverse of a story as possible that would speak to as many of these stories as we could in one two-hour stretch.”

Octavia Spencer and Tig Notaro play social workers and especially stand out for their comedic moments, which isn’t how they’re usually portrayed on film.

Anders said he’s discovered from experience that social workers can be quite funny.

“You’d be surprised. Social workers have to have a pretty strong sense of humor for the kinds of things they have to deal with all day long. It’s actually not far from the truth.”

Notaro said that besides hoping the audience leaves the movie entertained, she’d love it if it made people consider adoption.

“I think this is a pretty realistic portrayal of that world and it’s like, ‘Sure, this is tough and scary but there’s a lot of tough and scariness in the world but here’s the great part of it all.’”

“I think knowing that there are a lot of kids out there who are in desperate need of a home, hopefully that will pique people’s interest and make them kind of look under the hood a little bit more and hopefully look into bringing foster children into the home and eventually adopting.”