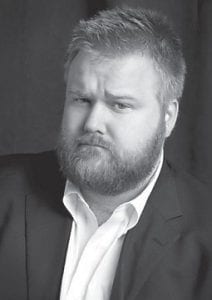 When Robert Kirkman talks zombies, he sounds more like a diligent student of such creatures than the guy who creates them for an audience of millions.

For example, ask Kirkman if being transformed into a zombie is a fate worse than death and he replies, reasonably enough, “I don’t really know what it’s like to be a zombie. But I’m pretty sure what it’s like to be dead: You’re dead. That’s not good, right? Being a zombie looks bad from the outside, but from the inside, it could be a great existence.

“How a zombie feels is a great mystery.”

A hearty chap of 32 with a neat beard and an outgoing manner, Kirkman has clearly opted against being a zombie know-it-all, despite years dwelling on the subject for his wildly successful comic book, “The Walking Dead,” and the wildly successful AMC series of the same name that his comic inspired and that draws an average audience of 6.6 million viewers each week. (It airs Sundays at 9 p.m.)

As the second season unfolds, Kirkman continues to regard the zombie apocalypse at his series’ core as yet another mystery beyond his ken.

“Who knows what causes a zombie invasion? I don’t think we’ll ever find out,” he says matterof factly. “But that’s not what the show is about. Our show is about a group of people dealing with the fallout. If a zombie invasion were to really happen, they would be more interested in finding food and staying alive. They would not be busy trying to find out where the zombies came from.”

Like the comic book ( with nearly 100 issues published so far), the series focuses not on zombies, but on a tattered group of survivors on the outskirts of ‘Walking Dead’ creator Kirkman (above) is from Cynthiana. (AP) Atlanta. Principal among them is Sheriff Rick Grimes (played by series star Andrew Lincoln), who, like the rest of the band, must carry on in a shattered society while defending themselves against the ever-present plague of so-called “walkers,” zombies always hungry for something — like a human — to feed on or infect.

“ The more time you spend on the zombies,” Kirkman says, “the more it fits into the realm of science fiction. But we’re telling about a completely real world. The disaster could have been a massive earthquake that caused society to crumble. Having zombies instead just makes it more interesting. But they’re the only unreal thing about the show.”

Growing up in Cynthiana, Ky., Kirkman was a fan of zombie movies.

“They’re totally entertaining and I have a hard time finding one that I don’t love,” he says. But he had a beef with the genre. “They always have one of two endings: Either everybody dies, or most people die and two people ride off into the sunset and you never see them again.

“I wanted to follow survivors in that world and see what they do and where they go.”

What they do is confront one obstacle after another.

On this week’s episode, the hunt goes on for a missing child. Another character falls victim to a crippling injury, a zombie attack and more. A romantic rendezvous takes a shocking turn. And Deputy Shane Walsh fondly recalls his many high school conquests, before the chilling thought hits him that, in this post-apocalyptic world, all those girls are gone.

“It’s like we’re old folks,” Shane ( Jon Bernthal) tells Rick. “ The people in our stories are all dead.”

Back in high school, Kirkman was bored and uncertain what to do with his life. After graduation, he was working at a lighting supply company when a friend suggested they collaborate on a comic book. With $200 he set up what he now terms a “rinky-dink publishing company and weaseled my way into comics.”

Along the way, he resolved to establish some ground rules for how zombies should behave.

“Vampires have their crosses and their garlic, and werewolves have their silver bullets,” he notes. “I’ve tried to canonize the most popular aspects of zombie lore. When I set up ‘The Walking Dead’ I took the best aspects of classic zombie movies and played up that stuff: for instance, most zombies shamble along. Fine. But eating brains? Ridiculous! Getting through a skull is a pretty difficult thing. So we stick to the zombies being general flesh eaters.

“I’m trying to add some new elements” — like the mindless mass migration of zombies, as if by some primitive herding instinct — “but mostly I’m trying to solidify what the actual rules are in a zombie universe.”

And now he’s doing it in a TV writers’ room in Los Angeles. Earlier this year, Kirkman, his wife and two young children uprooted themselves from Kentucky and moved West, where Kirkman, with no previous television experience, now plays a full-time role in the series, of which he is an executive producer.

“I created this world, and they optioned it for a reason, so they might as well have me involved in the process,” he says simply. “I’m one of many voices, but I feel like I’ve been included every step of the way. And it’s been fun.”

It’s also further elevated him in prominence among the zombirati. But Kirkman scoffs at the suggestion that he’s some sort of comics rock star.

“I may go to Comic-Con and get recognized and like, ‘Oh, can I get your autograph?’ And that may happen on the sidewalk around Comic-Con. But if I go 10 blocks out,” he laughs, “I’m just the chubby guy with the beard who looks like everyone else.”