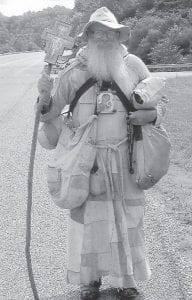 George Walters, 68, has been walking for 39 years and recently visited Letcher County.

Walters has walked through 41 countries, starting with a pilgrimage in 1970 from Barcelona, Spain to Jerusalem at age 29. The trek took a year and was 4,000 miles long. Since then he has walked more than 39,000 miles.

Walters’s journeys start in May and end in August. This year he walked to Alabama and is now on his way home to Pennsylvania.

He says, “God loves you very much. If you open your heart to God’s love for you, you will have peace, love, joy and happiness in this life and forever.

Walters owns almost nothing except the clothes he wears, a denim-patch robe made in 1988 by a friend who sewed together patches of old blue jeans. His sandals are made of old tires that he has cut up. He carries three sacks — one for food and water, one for his tent, and one for other items such as toiletries. He also carries a small denim sack which holds his Bible. The wooden walking staff he uses has a San Damiano crucifix and tiny bells at the top. Walters has no money except that which people give him, and says he doesn’t want any. He lives on the generosity of strangers he meets along his way.

When Walters was in Letcher County, he slept at St. George’s Catholic Church in Jenkins.

For more information, Google him at Pilgrim George.