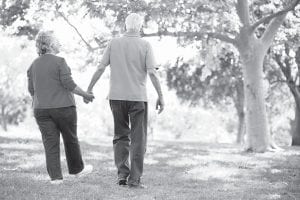 It’s not too late to get moving: Simple physical activity — mostly walking — helped high-risk seniors stay mobile after disability inducing ailments even if, at 70 and beyond, they’d long been couch potatoes.

One health policy specialist said the study released this week suggests prescribing exercise may be just as important as prescribing medications.

“Once you lose that mobility piece of your life, then you really lose independence,” said Patricia Katz of the University of California, San Francisco, who wasn’t part of the new research but said physicians need to put the findings to use.

Katz called it striking that among the walkers, “if you start to have problems, you have a greater ability to recover and get your functioning back.”

Older adults often shift back and forth between independence and conditions that can be disabling at least temporarily — a broken bone, an operation or a hospitalization from illness that requires time and rehab if they’re to get back on their feet.

Monday’s research examined whether regular physical activity could help even the oldest seniors stay mobile for longer despite other health conditions.

The study enrolled more than 1,600 adults between the ages of 70 and 89 considered at high risk for disability because they were sedentary and had various chronic health problems, such as heart disease or diabetes. More than 2 in 5 were 80 or older. To enroll, they had to be able to walk a quarter of a mile in 15 minutes — a long time, and some needed every minute.

“ We were targeting folks who potentially had the most to gain,” said Dr. Thomas Gill, a Yale University geriatrician who led the work.

The study compared seniors assigned to a regular walking program, plus a little strength and balance exercise, with a control group given health education.

Over 3-1/2 years, the walking program reduced the amount of time seniors spent suffering from a major mobility problem by 25 percent, the researchers reported in Annals of Internal Medicine.

The walkers were less likely to experience a mobility robbing condition in the first place, more likely to recover if they did and less likely to suffer another one, Gill said.

While the walking didn’t replace any necessary physical therapy, too often seniors “leave the hospital more debilitated than when they entered,” Gill said. The goal was to get them walking again as soon as possible.

Only half of U.S. adults of all ages get the amount of physical activity recommended for good health. And if they weren’t active during middle age, older adults often are especially wary of getting started. Maybe they have arthritic pain, or are worried if it’s safe given other illnesses, or fear they’ll fall.

Gill said the study shows many sedentary seniors can start walking safely, no gym membership needed — just a safe place such as a sidewalk or shopping mall. Those who were physically active were less likely to be injured in a fall, he noted.

There were six more deaths among the walkers over the course of the study, a difference that wasn’t statistically significant, he said.

No one expects a sedentary senior to suddenly speed-walk. The goal is to build up gradually to meet federal health guidelines that say even older adults should get 2-1/2 hours a week of moderate-intensity exercise. Essentially, that means enough to increase your heart rate — not breathless, but breathing a little hard.

Seniors “should be more scared of not doing something,” Katz said. “It’s not too late. It gives you some resilience.”