Walking is really worth the time and effort 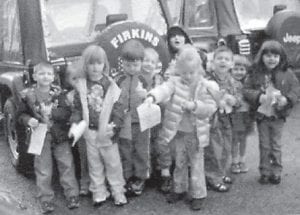 CAR SHOPPING — In spite of the economy, one local car dealer had a busy day recently when Cowan Head Start students went shopping for cars. Each child bought a car — Matchbox variety — and received a title for it. The Head Start’s theme for the week was transportation.

Our weather is still nice for this time of year. As you get older the seasons seem to go by faster. Hope everyone had a nice weekend.

Not many coming or going this time of year. So many of our family are gone and they are truly missed, and many others feel the same way.

I did a lot of walking in my time. Maybe that is why I am still here. Bert and I attended the exercise class at Mountain Comp. We really enjoyed the friendship and maybe that kept many of us on our feet.

We never lost a thing for doing something for our health. I don’t know how many of them are still here. I would love to hear from them if they are. We were all like family. They may not have the program now. Walking is worth your time and effort.

The little girl that walked to high school is still here. If there are any living from the class of 1934 who live away, I would love to hear from you.

Ella Vermillion and I are two who live on Little Cowan. We have both been blessed in many ways. I got to put my feet in the Atlantic Ocean and the Pacific Ocean.

Bert and I did a lot of traveling after he retired. He was a good observer as to our locations. How to get in and out, and where the food was. I don’t believe he ever got lost. I just mostly depended on him. I don’t believe they are making the tours now.

There is a big job loss according to the news. If you can go to the moon, they should be able to come up with something for these people.

Hayden Bentley celebrated his fifth birthday with his friends at the Cowan Community Center with a John Deere party. He went with his family to the Mexican restaurant for another party with his Papaw, Gale Gilley, whose birthday was March 5. All had a good time.

Elizabeth Fairchild, Cammie and Billy Ann Gilley and Miranda Bentley all went to Yoders at Hindman to shop and had a wonderful lunch at the mall.

Cammie Gilley and Elizabeth Fairchild went to the Little Dove Church at Eolia last Saturday night. They had a large crowd, some wonderful singing, guest preachers and a great dinner.

Happy birthday to Mel Sutphin, husband of Yvonne Brown Sutphin of Lynchburg, Va., and to Hobert Bays, husband of Thelma Cook Bays of Anderson, S.C. Both birthdays were on March 7.

Get well wishes to Madge Combs.

Cody Garrett has a commercial on WTVQ, Channel 36 in Lexington, for Kentucky Sports Medicine. He was chosen from his football team at East Jessamine High School. Cory received the Good Citizenship Award in his fifth-grade class, and Cameron received the Leadership Award in third grade. Cody, Cory and Cameron are sons of Kevin and Kim Garrett, and grandsons of Randy and Eula Brown.

Mike and Brad Wenning are on Cowan working on their house. Martha and Greg joined them for the weekend. Also visiting them and Martha’s brother, John, and Faye Campbell were Susan Ware and Susan Stamper. They all enjoyed a trip across the Little Shepherd Trail and to Leslie County to see the elk.

Glennon and Thelma Ison have been busy working on their place on Kingdom Come. While here, they took time to go out to dinner for their 55th wedding anniversary.

Tori, Callie and Ella of Jefferson City, visited Johnny and Barbara Banks this weekend. They also visited Clayton and other relatives and attended church on Sunday.