Wall back to ‘having fun and winning games’ 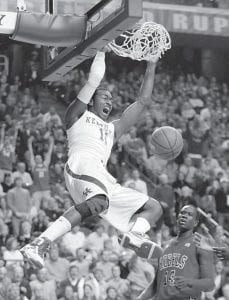 Kentucky’s John Wall dunked the ball in front of Mississippi’s Eniel Polynice during the first half of their NCAA college basketball game in Lexington on Tuesday. (AP Photo/Ed Reinke)

John Wall raised his arms, waited for the long pass from teammate Eric Bledsoe then rose up for a vicious dunk.

The heralded Kentucky freshman screamed as he landed, then added a sly little smile before racing back on defense.

Turns out all Wall needed to break out of his funk was a couple of dunks and perhaps his best allaround game in weeks.

Wall finished with 17 points and seven assists in 36 steady minutes to lead the fourth-ranked Wildcats to an 85-75 victory over No. 25 Mississippi on Tuesday night, putting to rest for good rumors of a rift with coach John Calipari by playing with the ease he showcased early in the season.

“It felt great to have the fun back,” Wall said.

Wall certainly looked like he was having a good time as Kentucky (21-1, 6-1 Southeastern Conference) built an early double-digit lead then held off a handful of runs by the Rebels (16-6, 4-4).

DeMarcus Cousins posted his fifth straight double-double with 18 points and 13 rebounds, Darnell Dodson added 14 points and Patrick Patterson had 12 points and six boards for the Wildcats.

Yet all eyes — including more than 20 NBA scouts and a handful of general managers — were on Wall. While the scouts were looking at his play, the rest of the crowd at a packed Rupp Arena was a little more focused on his demeanor, including his coach.

Wall created a small furor over the weekend when he told reporters he “wasn’t having any fun” and hinted at frustration with Calipari’s criticism of his play during a loss to South Carolina last week.

During a private chat, Calipari reminded the talented freshman point guard that he’s hardly the only phenom to struggle. Calipari urged Wall to stop worrying about trying to compete with his own hype and try to focus on simply enjoying himself.

Wall found his happiness while finding his teammates.

“I like to make plays, get the crowd into it,” Wall said. “I still have a lot of work to do. I just want to be the floor general. This is the best I’ve done running the team this year.”

It was certainly better than he’s shown in recent weeks. After a scintillating start to the season in which he became a media darling, Wall’s numbers have tailed off recently.

He came in averaging 16.2 points on 39 percent shooting in SEC play, hardly terrible but not exactly up to the ridiculously high standards Wall had set for himself.

Wall wasn’t perfect against the Rebels, turning it over four times, but he showed a knack for controlling the tempo. He pushed the pace when necessary but also smartly backed off the throttle when the situation called for it.

“He talked to his teammates, got everybody involved,” Calipari said.

Terrico White led Mississippi with 19 points and Chris Warren added 15 but the Rebels missed freshman big man Reginald Buckner, who sat out his second straight game with a sprained ankle.

Mississippi certainly could have used Buckner’s presence. Kentucky shot 50 percent from the field and outscored the Rebels 44-30 in the paint.

“Kentucky is too good to give them free points,” Mississippi coach Andy Kennedy said. “It was very, very difficult. We wanted to confuse them and slow them down a little bit.”

Wall and company didn’t give the Rebels a chance.

Kentucky used an early 15-0 burst to build a 27-9 lead. Mississippi recovered behind White and Eniel Polynice, pulling within 46-37 at halftime. Calipari felt the lead should have been larger, but 11 turnovers allowed the Rebels to hang around.

“There were some gaps, some turnovers we had, some lackadaisical plays,” Calipari said.

Still, the Wildcats were more than enough for the Rebels.

Dodson hit two 3-pointers early in the second half to help Kentucky extend the lead to 58-41, though Mississippi managed one last burst, pulling within 60-57 on a basket by White with 13:55 to play.

Yet the Wildcats were undaunted, doing something that’s been one of their few problems this season: finishing strong.

Cousins started Kentucky’s game-clinching 11-2 run with a putback. Darius Miller then knocked down a 3-pointer before Cousins took a charge. Patterson nailed a 3-pointer then added a three-point play as the Wildcats went back in front 71-59.

“I thought we were going to come back and make a run but we didn’t have enough firepower to make the run,” Polynice said. “They’re a good team and they just outworked us tonight.”

Mississippi never got back within single digits, and Wall capped his night with a 3-pointer to put Kentucky up 80-62 with 4:05 remaining.

He walked off the court to a standing ovation, and received another one when he came back onto the court for a postgame radio appearance as the crowd exhaled with Kentucky’s star apparently back in his coach’s good graces.

“It feels good and hopefully all the other stuff will go away,” Wall said. “But I am back to having fun and winning games.”