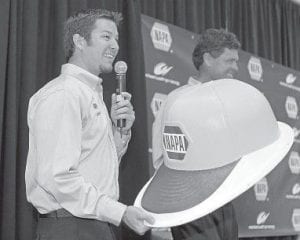 With four wins over 25 seasons, Michael Waltrip isn’t foolish enough to believe his driving record will ever earn him a spot in NASCAR’s Hall of Fame.

As a team owner, though, Waltrip has plenty of time to build a distinguished career.

He took a huge step toward upgrading Michael Waltrip Racing on Tuesday, announcing he’ll scale back to a partial schedule in 2010 to make room for Martin Truex Jr. to join the team.

“I’m turning my car over to a guy that I think can go win the championship in it, and I’ve always said … if I wasn’t the guy to go race it on Sunday, somebody else would take my place,” Waltrip said as he introduced Truex, considered the top free agent in a mediocre class of drivers in contract years.

“I believe at this time in my career that Martin is the right guy to take over my car and go win races in it. I didn’t have to quit, I didn’t need to quit, I just wanted to do this. ” Waltrip will drive his No. 55 Toyota in at least four races next season, including the seasonopening Daytona 500 with longtime sponsor NAPA on his car. He could drive as many as 12 depending on sponsorship, he said.

NAPA will also sponsor Truex, who will drive the No. 56 in a return to a longtime family number he used at every level until signing with Dale Earnhardt Inc. in 2003. He’ll finish this season with Earnhardt-Ganassi Racing, where the one-time Sprint Cup Series winner is 24th in the standings.

Still, his signing is a coup for Waltrip, who had slowly overcome his disastrous 2007 debut as a car owner and turned MWR into a team capable of signing top drivers. But upgrading the team meant the 46-year-old Waltrip had to walk away from a full driving schedule, a decision many racers aren’t able to make until long after their performance level has plummeted.

His older brother, three-time Cup champion Darrell Waltrip, struggled with his own retirement and drove eight winless seasons before calling it quits in 2000 at 53 years old.

Michael Waltrip didn’t appear to have the same conflicts.

Although he shed tears during a morning team meeting, Waltrip was stoic on stage during the formal announcement, when he insisted he was content with his decision in front of his extended family, MWR’s employees and about 100 fans who watched from a gallery over the shop floor.

“I’m totally at ease with where I’m at. I think my legacy as a driver has pretty much been shaped up by now, and I probably don’t have Hall of Fame numbers,” said Waltrip, a two-time Daytona 500 winner.

“There’s one time I lost 462 races in a row. I remember that pretty good. And when people talked about giving up, that’s just not who I am.”

That became clear as he weathered the humiliation of his debut season as a car owner.

Waltrip worked tremendously hard to have three teams ready for the 2007 opener, when he reported to Daytona as newcomer Toyota’s flagship team. Instead, he was caught in a cheating scandal that embarrassed NASCAR, Waltrip and Toyota and almost led him to pull out of the biggest race of the year.

He instead kept digging, only to learn quickly his team was not up to par with the top organizations in NASCAR. MWR drivers struggled to make races, and Waltrip had off-track personal issues that dogged him all year.

Although a handful of sponsors pulled out of MWR, NAPA remained committed to the popular pitchman.

“Even when we were having a rough time, Michael scored extremely well in all the research that we looked at in terms of being a great brand ambassador for us and maintaining a high level of popularity,” said Bob Susor, president of NAPA.

“We’ve never lost any faith in Michael in terms of his ability to help promote our brand. He always said all along as soon as he could find somebody he felt could make the car go as fast or faster than he could, he would get out of car. ” NAPA gets the both of best worlds in Waltrip’s decision.

They still get Waltrip as a spokesman from his role as team co-owner, and also have Truex to give the brand on-track results.

Truex entered the announcement in his new Toyota to a thunderous ovation from the MWR employees on the shop floor. The 29-year-old won’t have any time fitting in at MWR — he was teammates with Waltrip at DEI, and his younger brother, Ryan Truex, drives a NAPA-sponsored car as a development driver for the team.

But signing the elder Truex was no slam-dunk for Waltrip, who teamed with general manager Ty Norris to court the driver. Ultimately, it was the on-track improvement shown by MWR driver David Reutimann — he won his first race at Charlotte in May and at 14th in the standings is a legitimate challenger to make the Chase for the championship — and rookie Marcos Ambrose, who receives support from the organization.

“It was me talking with Ty and Michael and their passion and how bad they wanted me, and how much appreciation they showed me that I was thinking about coming here, talking to them, and then it was their on track performance,” Truex said.

“My little brother has been racing here all year and going out there and doing a great job. I got a glimpse and got to see how they run their business and the way they do things in their shop, and the people they have working here, and everybody I talk to, you know, tells me about how much they love it here.”