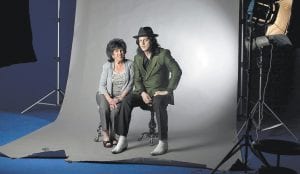 Jack White pose for a portrait at

The spotlight that made Wanda Jackson’s crystalline blue eyes sparkle and her white-fringed blouse shimmer was tinged with pink as she took center stage in front of hundreds of fans in Third Man Records’ concert space.

She was surrounded by an impossibly hip 11-piece lineup that included a horn section, backup singers and Jack White as band leader. It was another high point in a remarkable renaissance for the 73-year-old “Queen of Rock ‘n’ Roll,” who was in the midst of a mini-tour that would take her from her first Grand Ole Opry appearance in 56 years to slots on the “Late Show With David Letterman” in New York and “Conan” in Los Angeles.

“I want to thank Jack White for making all this happen for me,” Jackson said at a recent event. “He forgets I’ve got to watch my heart. I’m an old lady. But boy I don’t feel it tonight.”

She told the crowd about the release of her new White-produced album, “ The Party Ain’t Over,” released Jan. 25. The collection of rock ‘n’ roll, country and gospel covers makes a loose-legged run through songs like Bob Dylan’s “Thunder on the Mountain,” Amy Winehouse’s “You Know I’m No Good” and “Busted,” the Harlan Howard song made famous by Johnny Cash, with White and an all-star band backing her.

Jackson and White got together to record a couple of songs to be released as a vinyl single by White’s Third Man Records, they explained in an interview with The Associated Press last July. They bonded over their shared love of rockabilly and things went so well, they kept going.

“I’m a rockabilly fan first and foremost when it’s all said and done,” White said then. “I’m really well versed in her early recordings. … So we could go and talk for hours and hours about those records.”

Jackson played a pivotal but often overlooked role in the history of rock ‘n’ roll. She is considered to be the first woman to record a rock song, 1955’s “Let’s Have a Party,” stepping up to the mic at the urging of emerging star Elvis Presley. The diminutive dynamo’s knives-out vocal delivery helped lay the groundwork for all the women of rock and launched a 50-plus year career that has taken her around the world several times.

White wanted to capture the flavor of her wide-ranging career and brought Jackson songs from some odd places. She jokingly called him a “slave driver” in the studio, pushing for more and more from her vocal performances than even she thought she was capable of doing.

“He brought some unusual songs to the table and I had to stop and think about some,” Jackson said in July. “But he’s got such a sweet way about him, he talked me into some of them. He stretched me.”

Jackson is hoping for the same kind of bump from her association with White that Loretta Lynn got in 2004 when the two teamed up on “Van Lear Rose.” That album was hailed by fans and critics and netted the country music icon two Grammy Awards after a long dormant period.

Jackson never achieved great success in the United States, but she has been popular for decades overseas. The Oklahoma native was finally inducted into the Rock and Roll Hall of Fame in 2009 — with the backing of people like Dylan and Bruce Springsteen — and she received a lifetime achievement award from the Americana Music Association last year.

Her dream would be another shot at a Grammy to round out a special run.

“This album is causing a stir in Europe and Australia, Japan and all across America, and it’s all because of him,” Jackson said of White.

White leaned in and whispered: “You forgot Venezuela.”

“And Venezuela, you’re right,” Jackson said with a laugh. “Trinidad.”