Want cheapskates to spend? Hawk gizmos that save cash 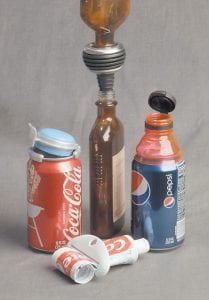 How do you get penny pinchers to spend these days? Pitch products that promise to save them money.

Demand is rising for kitchen and bath gadgets that squeeze out that last blob of toothpaste and help get the suds out of tiny slivers of soap.

Marketers of these gizmos tout how the pennies they save by reducing waste can add up. Retailers are stocking up.

During the Great Recession, penny pinchers got even cheaper, while showing the newly frugal how it’s done. Cheapskate gadgets may be a sign of the times, but they’re also a sign of how product makers and retailers are trying to get people back in the spending habit.

Big companies like Wal-Mart Stores Inc. and The Container Store and a longtime “As Seen on TV” pitchman are stocking up on items claiming to help people save a buck, such as:

— Caps that keep the fizz in opened soda cans.

— Digital day counters: Gizmos that count the days and hours food has been in the refrigerator, to help keep track of when that milk might be in danger of going bad.

— New, stylish versions of pants extenders that let people wear their clothes even when they gain or lose weight.

A.J. Khubani, the man behind many “As Seen on TV” gadgets such as the PedEgg foot scraper, is making cheapskate gimmicks a priority at his company Telebrands, one of the nation’s top direct-response TV marketing companies.

More than half of Telebrands’ gadgets, sold online and at 90,000 stores, are now focused on helping shoppers be cheap. Khubani, who has been traveling around the country to meet inventors, is speeding up the number of new products he’s launching to every 30 days from every 60 days.

“The mood of the country has changed,” said Khubani. “We’ve had tremendous opportunity with this recession.”

Since 2007, Telebrands’ revenue has doubled to several hundred million dollars, he said.

Retailers, encouraged by rising sales and scrambling to find new ways to pump up anemic sales, expect these products will have staying power as Americans try to save more and waste less.

An open question is whether the truly frugal are too cheap to buy the gadgets that can cost up to $20. Who needs a soap saver when an old washcloth or a pair of pantyhose will do?

“Surely, people who lived through the Great Depression found ways to use up all their soap without needing a soap saver,” said Lynnae McCoy, who runs the blog beingfrugal.net. “Are these products convenient? Some of them, yes. But are they necessary? No. And in some cases, they’re probably a complete waste of money.”

Mona Williams, a buyer at The Container Store, said revenue is up more than 10 percent for cheapskate accessories since the recession began. The chain doubled the number of these gadgets it stocks. These products,which include Jokari’s “Pump & Pour,” a hinged cap that keeps canned drinks from going flat, will continue to be best sellers, she says.

The scars of the Great Recession have lingered. One area that has grown since the recession is the personal saving rate. While it slowed to 5.9 percent of after-tax income in July, it is still nearly three times higher than it was before the big downturn.

Inis Lovely, 47, who used to not think about saving every last scrap of food or lotion, says she and her husband have focused on using up what they buy since she lost her job in 2007.

Even though she’s been back to work for a year and her husband’s contracting business is rebounding, saving is still a top priority.

But she’s not sold on the cheapskate accessories; she’s crocheted her own soap savers for well under $1 apiece.

“I would only buy it if it paid for itself,” sniff ed the Colorado Springs, Colo. resident.