Want to know who ‘Stiller Bill’ was? This group can tell you 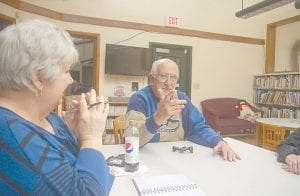 Richard Smith and Joyce Hampton were among the members of the West Letcher Oral History Society telling stories about the area’s past in January at the Blackey Public Library. (Photo by Sam Adams)

If it was between Isom and the Perry County line, there’s probably someone at the West Letcher Oral History Society who can tell you about it.

“I opened up a can of worms on the Caudills,” said Bill Caudill, a retired high school art teacher, after showing around a painting of William James “Stiller Bill” Caudill’s log cabin that he’s working on. “I put that on (Facebook) last week, and I still got a call this week from somebody asking about Stiller Bill’s descendants.”

“Stiller” got the nickname by distilling moonshine, probably behind what is now the C.B. Caudill Store building at Blackey. The members of the West Letcher Oral History Society are still working out that puzzle.

The group meets monthly at the Blackey Public Library, built over the foundations of a store building that was destroyed during what is still probably the biggest fire in the county’s history. It consumed 20 buildings on Blackey’s Main Street in December of 1927, only seven months after the 1927 flood claimed at least 17 lives in Letcher County, mostly in that area. 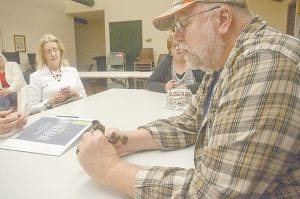 The group sits around a long table in the library addition, and each brings something new, which really means something old, to the members every month.

“We do a show-and-tell thing that has turned out great for me,” said Richard Smith, another retired teacher who presides over the meetings.

The “show-and-tell thing” involves an antique, usually tied to the area, for members to identify — if they can. If they can’t, the person bringing it will explain. This month, the antique was a rusty bit of cast iron that turned out to be a roll crimping tool for black powder shotgun shells. Smith, who brought it in, said another resident of the area had it in his tool shed for years, and it was passed down from someone else who reloaded shotgun shells before World War I.

Not every item is so easily identified. Members are still stumped by a tree stump. Stripped of bark with a hole drilled in top and a handle fitted in it, a member found it in a museum and snapped a picture. No one they know, not even the museum that has it, has identified it yet.

Over the past year they’ve seen antique brooches, a cast iron shoe stay, and scrip from the Marian Coal Company at Letcher. And some items just can’t be picked up and carried into the library. Among them is the narrow concrete passage with stairs inside that sits just outside Calvary Campus, which the West Letcher Oral History Society members still know by it’s original name — Stuart Robinson School.

The stairs are part of that original school. When it was built in 1914, students and teachers rode horses to school, and SRS had a dairy barn where cattle provided fresh milk for the students. The concrete structure is a stile, a ladder sort of device that allowed people to cross the fence without opening a gate. The cows couldn’t climb a stile.

As the name suggests, much of what the West Letcher Oral History Society knows isn’t written down — at least not yet. The group is in the process of collecting what now exists only in the memories of local residents and putting it down on paper. The papers then go into books in the library for anyone who wants to know who delivered babies or served in the military, or how high the water got in 1927 can read all about it.

“It all started with Gurney Norman (author, University of Kentucky professor, former state Poet Laureate of Kentucky and an SRS alumnus). He made a statement a few years ago at Stuart Robinson,” Smith said. “He’s taught from Maine to Spain, literally, and he said this place has the best oral history of any place he’s been.”

So for their own entertainment, a group of local residents got together and started learning some of that oral history that they didn’t already know. Three years later, they’ve learned the location of the Blackey Ice House, Gray’s Theater and the Indian Bottom.

They’ve learned how many families owned silk worms between Linefork and Doty in the years before the Civil War, and at a recent meeting, retired teacher Tony Blair reminded them that a long-legged brown cricket that lives under houses is called a “sock eater.”

Smith marveled at some of the things members of their group have learned over their lifetimes here, and over the past three years of research.

“There’s a pretty rich history here,” he said, “but it’s slipping away quickly.”