Want your cactus to last 100 years? Follow this advice 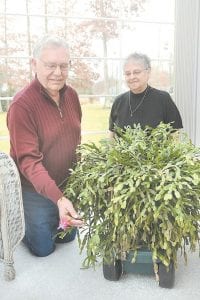 Schlumbergera, mumbergera. Most recipients would take a Christmas cactus (genus Schlumbergera) and hide it away in the corner wrapped in forgotten red or green foil. Maybe it gets enough water and light to last a few yuletides. More likely, along with the prayer plants that populate wellwishing dish gardens, it gives up the ghost within a few months.

Not Glen Blankenship’s Christmas cactus. He got his from his grandmother when he was 8 years old. Glen, deserving of an honorary green thumb, is now 79 years old. That makes the cactus roughly 71.

“If you think about it,” he says, “This was given to me before Pearl Harbor in World War II.”

Back in 1941, Grandma Blankenship didn’t think it strange to give her grandson a plant for Christmas, and he has done her memory proud in attending to it.

The cactus is large enough to be planted in a cart with wheels for moving from location to location.

“It’d be too big to get through this room,” Nellie, Glen’s wife of 60 years, surmises, had Glen not taken to regularly pruning it. “My mother helped me care for it up until Nellie and I got married,” he states.

All three of their children have gotten starts from the manybranched behemoth. Glen reckons at least 10 plants should be growing their own way toward a century now, having taken root from his generous clippings. Nellie would guess at more.

Having bloomed Thanksgiving through May of decades marked by wars and strife of all kinds, the closest the cactus came to dire circumstance was at the hands of his then 5-year-old daughter Michelle.

“She broke all the leaves off and piled them up around her. There were just stems sticking up out of the dirt.”

The coal miner of 37 years, 24 of which he spent as a mine foreman, put his work ethic and plant knowhow into nursing it back to health.

Native to the coastal mountains of southeastern Brazil, the pincerlike branches of the Christmas cactus are more delicate versions of their meatier, pricklier desert cousins. Glen’s gets watered not too much, not too little, but just right and has its own sunny window to park beside. In summer, it enjoys a nice spot out on his deck. He would take it hard if his old friend one day stopped blooming.

“I’d feel sad if anything ever happened to it,” he states.

Glen fancies himself somewhat of a gardener, chronicled in pictures he keeps: images of him standing outside his Beckley home beside prehistoric-looking hostas. One tomato plant he grew expanded to two-stories vertically and fed several neighborhood families.

Still, he doesn’t claim to be an expert, a clandestine fertilizer or sandbagger of soil secrets. He says anyone able and willing to give a little tender love and care and attention can accomplish the same results.

“Just break a piece off and stick it in the dirt. Keep it watered and give it plenty of sun,” he says, and in time, the great thickener of things, “it will grow.”

Nurseries, has a story similar to Blankenship’s.

“We have a Christmas cactus and we don’t know exactly how old it is. We think it has perpetuated for over 100 years.”

It belonged to his great-grandmother, Bettie May Greene, who achieved fame back in the ‘90s as the oldest living person in the United States at the time. She was 114 years old. Since, plenty of family members have taken starts off Bettie’s cactus, continuing her memory with what Monroe says is one of two types of plants (the other being the rabbit’s foot fern) most likely to achieve unbelievable age.

Here is his best horticultural advice on what to do to increase the shelf lives of your favorite Christmastime plants:

The most common complaint about a kept Christmas cactus that Monroe hears is: “It’s not blooming anymore.” Usually, he finds the plant has been kept inside under continuous artificial light, never experiencing the long and short days which will prompt a plant to bloom. “Let it get into natural light situation for a few months. And fertilize it during the summer months.”

Put them outside once the risk for frost has passed and let them be outdoor plants. “Choose a place not overly sunny to get it acclimated to natural day length, then bring it inside before the frost starts again.” This will get the plant’s internal clock ready to set it to blooming on time.

After blooming, cut back the plant, shake all soil from the bulb and store it in a brown paper sack, in a cool, dark place like a cellar, garage or basement. “Replant it sometime around Nov. 10.” Should they desire, consumers can keep the same bulb blooming for three to four years this way. “Retail stores often get amaryllis that are treated with wax so the bulbs last longer in the store,” but treated ones are less likely to bloom year after year.

Enjoying their most profitable selling season in about seven years, the poinsettia, says Monroe, is the most difficult greenhouse crop to grow. “They don’t have true flowers, they have bracts” or leaves that can become really colorful if grown under the right conditions.

To develop the vibrant bracts of his poinsettias, Monroe methodically covers the plants with black blankets to set their internal clocks for December color.

The practice for managing this at home is to care for the plant throughout the year, then to put it in a dark place for a couple of weeks in October, a simple concept at which Monroe admits very few people are successful.

Given the hassle with perpetuating poinsettias, should owners throw them on the compost heap after the holidays and come back to Greenbrier Nurseries to get new ones next year? Amen, says Monroe.

Information from: The Register Herald, www.registerherald.com