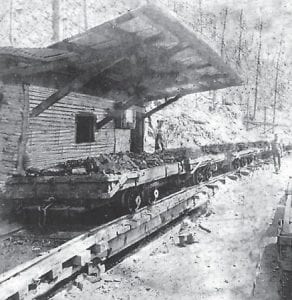 WEIGH STATION — This weigh house was located in the 1940s at Marlowe or Belcraft. Pictured are (left to right) Arlin Caudill, Burchell Caudill, and Fred Hughes.

My brother, Richard Cornett, taught several grades in the Carcassone School in the 1960s. He is now married with five children, and three grandchildren, and lives in Kettering, Oh.

His address is: Richard Cornett, 2208 Patricia, Kettering, OH 45420, or you can email me and I will see that he gets copies of all who would like to contact him. My email address is: niftyfiftyfiver@yahoo.com.

There were others, whose names we do not have. If you were one of his students, please write or email him.