War memorial repaired, back in place 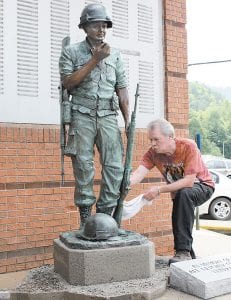 Artist Sam McKinney, a 1969 graduate of Fleming-Neon High School, polished “Freedom’s Price” on June 7. The dog tags being held by the soldier were made from a cast of dog tags that belonged to McKinney’s father, a World War II veteran of the Normandy Invasion.

A sculpture honoring Letcher County’s war casualties is now back in place in front of the Letcher County Courthouse after being taken away a month ago to be repaired.

The 300-pound sculpture, “Freedom’s Price,” is the work of artist Sam McKinney, a Letcher County native. McKinney sculpted the memorial after former Letcher County Sheriff Ben “Buster” Taylor raised funds for it more than 27 years ago.

McKinney, his friend Roy Tackett of Letcher County, and two county workers lifted the statue back onto its base, made in the shape of Letcher County, on June 7. McKinney said weather had cracked the soldier and split the guns he is holding.

McKinney said the repairs, ordered by Judge/Executive Jim Ward, were fairly simple since the sculpture is made of bronze powder.