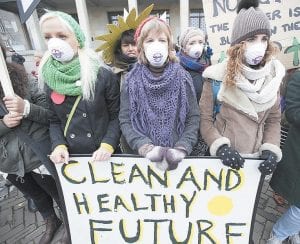 Young girls protested in front of the Polish Ministry of Economy earlier this week where a coal industry meeting was taking place in Warsaw, Poland. (AP Photo)

The top U. N. climate diplomat on Monday told the coal industry it should leave most of the world’s remaining coal reserves in the ground and start investing in renewable energy sources.

Speaking at a coal summit on the sidelines of a U.N. climate conference in Warsaw, Christiana Figueres said the coal industry needs to change radically to help reduce the carbon emissions that scientists say are warming the planet.

“The world is rising to meet the climate challenge as risks of inaction mount, and it is in your best interest to make coal part of the solution,” Figueres said.

The coal event was seen as a provocation by climate activists, who used a crane to reach the ministry’s roof, where they unfurled banners criticizing Poland’s — and the world’s — reliance on coal and other fossil fuels. Police used another crane to take them down, as panelists at the coal summit said that the people in the room, not the people on the roof, have the possibility to change the coal industry.

Coal industry officials at the event didn’t directly address her remarks but said the world cannot do without coal because in many countries it’s the only available energy source.

“A major aim of the summit has been to encourage open and constructive dialogue on the climate challenge — we’re not going to meet our climate objectives if we are not all part of the solution,” the World Coal Association, which organized the event, said in a statement.

Polish Economy Minister Janusz Piechocinski, whose country generates about 90 percent of its electricity from coal, said: “You cannot have a low-emissions energy transformation without talking about coal.”

Coal accounts for less than 30 percent of the world’s energy supply but more than 40 percent of energy emissions, according to the International Energy Agency.

Figueres, who was criticized by some climate activists for attending the conference, noted coal’s role in economic development since the industrial revolution but said it’s come at “an unacceptably high cost to human and environmental health.”

She said aging, highpolluting coal plants must be closed and new plants should implement technologies that allow for emissions to be trapped before they are released into the atmosphere. Such technologies are expensive and currently not widely used.

To bring down CO2 emissions to levels that would avoid dangerous levels of warming, most of the existing coal reserves must be left in the ground, Figueres said.

“Some major oil, gas and energy technology companies are already investing in renewables, and I urge those of you who have not yet started to join them,” Figueres said.

Back at the U.N. conference later Monday, she told reporters she didn’t expect any major shift in the industry’s deployment of capital anytime soon.

“They really need to do a major, major rethink,” Figueres said. “So I don’t expect them to stand up immediately and go, ‘We are ready for the challenge right now,’ but I do expect them to take the message very seriously.”

That message was echoed by U.S. climate envoy Todd Stern.

“The world runs signifi- cantly on fossil fuels right now and that’s not going to change overnight,” he said. “ But at the same time if we’re going to get a grip on climate change … the balance of energy in countries all over the world is going to have to tilt much more toward non-fossil sources.”

Coal emissions have declined in the U.S. as some power plants have switched to lower-priced natural gas. But they are growing fast in China and India to meet the energy needs of their fastgrowing economies.

Coal industry officials say significant emissions reductions can be achieved by improving the efficiency of coal-fired plants. But in the long term analysts say expensive carbon-capture technologies need to be implemented to make the deep cuts required to slow climate change.