Ward reflects on 12 years of leading the county

Ward is most proud of rec center, prison 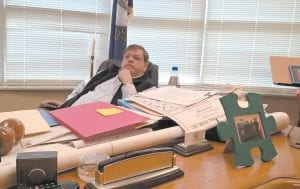 That morning, he was with the road department determining how to fix a road. That afternoon he was marrying a couple at the nursing home.

It’s been a job he’s relished for the past 12 years and would have continued to love if he had won reelection in November. But he didn’t, and on January 7, Ward will wake up as a private citizen.

“For about a month, I’m not going to do anything but what Jim wants to do,” he said. “And maybe what my wife wants.”

Ward spoke to The Mountain Eagle recently about what he feels he’s accomplished, and his disappointments.

Ward ticked off a list of things that have been done since he took office, including increasing the number of people served by water lines from just over 20 percent to more than 80 percent, creation of a government access television channel that allows anyone with cable to watch the fiscal court and city government meetings, being invited to the White House to talk about local government issues, building an R.V. park at Fishpond Lake, and overlooks on Pine Mountain by the Tourism Commission he appointed last year.

“I’m kind of sad about leaving because there’s still work to do,” he said. “I’m going to miss serving the people. We’ve done some good things.”

Among the things he most proud of: The Letcher County Recreation Center and plans to build a federal prison at Roxana.

In addition to broad support in the county, those two things also have vocal critics who say that the county can’t afford the $600,000 a year payments on the recreation center, and that prisons aren’t good economic development. Ward argues the recreation center has been worth the money, and the prison is going to bring jobs and infrastructure improvements that otherwise wouldn’t come.

Ward said juvenile court cases are down, and he credits the recreation center with that.

“When I come through the hallway, I used to see all these kids out in the hallway waiting to go to court, and I don’t see them now,” Ward said.

Statistics from the state Administrative Office of the Courts show juvenile charges are down 54 percent since the year the center opened. To what that is attributable isn’t clear, but Ward feels sure it is the opportunities offered by the center.

“Instead of being a tax burden on the county, they will be taxpayers,” he said.

The center also houses the county’s senior citizens program, one of the programs that was cut to the bone as tax revenues dropped and senior centers around the county closed. The Kentucky River Area Development District eventually took over the program, and operates it from a single location at the recreation center.

While the program is still in operation, its decline is a result of the same economic problems that are squeezing the recreation center, and led to Ward’s biggest disappointment — losing the November election to District 2 Magistrate Terry Adams.

“It had a lot to do with the economy,” Ward said. “As the coal severance money went down, we didn’t have the money to do all these things we had been doing.”

Despite losing the election, Ward said he doesn’t regret the cuts that were made.

“We are elected to do a job, and in my opinion you have to stand up and make those hard decisions,” he said.

A few days earlier, Ward and most of the other members of the court voted to reinstate many of the expenses that they had cut earlier. Among the spending approved at the court’s last meeting was a $2 per hour pay raise for county employees, a $300 per month salary for deputy coroners, $200 a month expenses for each constable, and resuming paying retirement and health insurance premiums for the sheriff’s department. Adams asked that the court not spend that money and allow the incoming court to make those decisions, but he was outvoted on the court. Ward said he doesn’t think the increases will hurt Adams and the five new magistrates when they take over on January 7. He said 60 percent of the budget is left unspent for when the new court is sworn in, and said about 38 percent was left when he took over in 2007.

“We just felt like the budget was stable, and since we were the ones that had to make those tough decisions, we ought to be able to put some of that back,” Ward said.