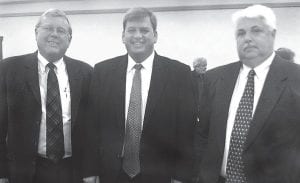 Letcher County Judge/Executive Jim Ward, center, posed for a photo after being elected chairman of the Kentucky Coal County Coalition, an organization of 29 coal producing counties and 35 other counties impacted by the coal industry formed organized to work with state government to promote the coal severance tax and use of the tax for the economic development and improvement in the quality of life in the coalfields. Posing with Ward were (left) Richard Tanner, executive director of the coalition, and Martin County Judge/ Executive Kelly Callaham, the group’s immediate past president.