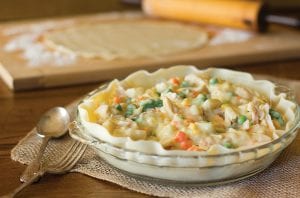 Cheddar Cheese Chicken Pie is seen in this photo.

Chicken pie is one of the first dishes I successfully made as a newlywed. It has become one of my favorite comfort-food recipes. Savory pies date back to medieval times. Originally, the sole purpose of the double crust was to protect the ingredients from the metallic flavor of the pot. The crust wasn’t designed to be eaten and was discarded after the filling was cooked.

This single-crust chicken pie recipe is a savory combination of modern convenience products and classic homemade touches. Use a leftover baked chicken or a store-bought rotisserie chicken, leftover cooked vegetables or frozen mixed vegetables, and a frozen pie crust to cut the prep time in half.

The creamy sauce combined with the chicken and vegetable filling, and topped with a layer of sharp cheddar cheese turns this classic pie into a hearty, one-dish meal. The filling can be made in advance and either refrigerated or frozen. Just make sure that you heat the filling before sprinkling on the cheese and topping it with the pie crust. This savory chicken pie recipe is great way to warm up during a cold winter day.

1. Heat oven to 350 F.
Lightly grease a 2-quart casserole dish.
2. Melt 4 tablespoons of
the butter in a large skillet
over medium heat. Stir in
onion, celery and garlic.
Cook until tender, about 5
minutes.
3. Stir in chicken and frozen vegetables, 1 teaspoon
of the poultry seasoning
and salt, 1/2 teaspoon of the
pepper, the cayenne pepper
and sugar. Cook, stirring occasionally for 2 to 3 minutes.
Remove chicken mixture
from skillet and place in the
prepared casserole dish. Set
aside.
4. To make the sauce,
melt 4 tablespoons of the
butter in the skillet over
medium heat. Whisk flour
and remaining teaspoon

of poultry seasoning into
the butter; turn heat to low
and cook, stirring occasionally, until light brown
and thick, about 3 minutes.
Turn heat to high and slowly
whisk in the cream, evaporated milk or buttermilk.
Whisk in chicken broth.
Continue whisking until
mixture thickens, about 3
to 5 minutes. Stir in remaining salt and pepper, and the
nutmeg.
4. Pour the cream sauce
over the chicken mixture,
stirring to coat the mixture
evenly. Sprinkle the chicken
mixture with the cheese.
Top filling with the prepared
pie crust, pressing down
crust around the edges of
the dish to seal the crust
over the filling. Cut three,
1-inch slits in the center of
the crust to allow steam to
escape. Bake for 30 to 35
minutes until crust is brown
and golden. Serves 6 to 8.

.
Angela Shelf Medearis
is an award-winning children’s author, culinary historian and the author of
seven cookbooks. Her new
cookbook is “The Kitchen
Diva’s Diabetic Cookbook.”
Her website is www.divapro.com.