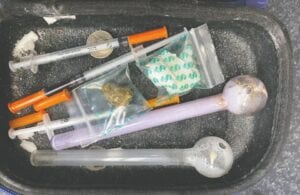 The Letcher County Sheriff said his department confiscated three pills believed to be the club drug ecstasy while serving a second degree escape warrant at a home on Pine Creek.

Sheriff Mickey Stines said he and Deputy Ben Fields, who manages the home incarceration program for the courts, went to the home of Lana Kincer, 41, at 358 Pine Creek, after she requested to leave home for an appointment and remained away all day.

He said she gave permission to search the home and the officers found several pipes and several different types of drugs, including three bird-shaped white pills with a symbol resembling “Angry Bird,” a video game character, on one side.

“She had the party pack,” Stines said. “She had meth, Neurontin and Viagra.”

Stines said the suspected ecstasy was in the bag with the Neurontin and Viagra. Another plastic bag contained methamphetamine, and another small package contained marijuana.

She was in jail Tuesday.